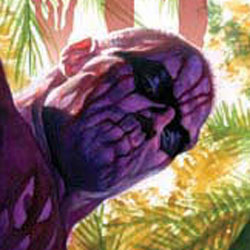 When you are the last in a long line of protectors and your entire family has been wiped out by someone who wants to take over your country, there’s only one thing to do – bloody, bloody, revenge. Previously in The Last Phantom: Kit Walker is the latest in the long line of those who walk, protecting the country of Bengali. On a return trip from a fund raiser, those that seek power instigate a coup, blowing up Kit’s plane, and murdering his family. Kit survives and is quickly surrounded by the team that killed his wife and son. Good thing he has his rings and guns, because things are going to get ugly.

THE GHOST WHO WANTS TO KICK YOUR ASS!

In the revenge tale, the first chapter introduces the reader to the characters, and attempts to endear the reader to the hero, and feel his pain when the villains wipe out everything that he loves. The second chapter features the hero flipping out and taking retribution on those that wronged him. And that’s exactly what readers get in this installment. Kit Walker’s guns and rings were spared the plane crash and donning what costume he can, begins his quest to reach the big boss by dispatching those who took out his family with extreme prejudice. Beatty and Ferigato do keep the gun splatter to blood spurts only, and fortunately the editors made the wise choice not to have the page erupt with brain matter and guts in every single panel.

By the end of the issue, it’s clear to the big boss and his cohorts know Walker is coming for them, but they don’t know that The Phantom – The LAST Phantom is coming for them. If there was a soundtrack to this issue, the end panel would swell with some swanky Isaac Hayes tune as the credits role.

IN A PINCH, USE PURPLE BERRY JUICE

While I did read the first issue, it is still really unclear if Kit has covered himself in the blood of his loved ones, or if he mixed together some purple berries for his make-shift costume of death. In either case, the imagery conjured up by Eduardo Feigato is stunning in the execution. I love how we see horror, turn to shock, turn to anger, turn to berserker rage mode all in the span of a single issue. The coloring by Vinicius Andrade also deserves to be recognized as the greens and browns of the jungle are offset nicely by blood/berry covered hero on a rampage. While the Phantom doesn’t have his domino mask in this issue, the sans pupil effect does make an appearance several times, and it works well in this story.

The Last Phantom is probably a story that will polarize many long time Phantom fans. A lot more violence, more shocking moments, and a change in character direction is a hard pill to swallow. For better or worse, it is the direction Dynamite Entertainment has decided to go with their tenure with the character. I trust Scott Beatty, he did a good job with Buck Rogers, and I think when all is said and done, The Last Phantom will go down as another thrilling adventure of The Ghost That Walks. If you are looking to read the further adventures of one of the first costumed heroes, The Last Phantom is worth checking out and earns 3.5 out of 5 Stars.