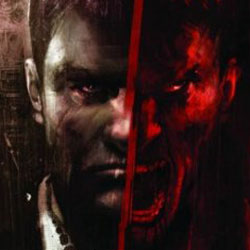 REVIEW: Ryder on the Storm #1 Welcome to the streets of a futuristic dystopian city, comprised of architectural influences including Syd Mead’s Blade Runner designs, The Crow, and some European flair by way of cobblestone streets and foreboding archways. Welcome to the world of Radical Comics Ryder On The Storm. Things are not what they seem in the world of Licensed Private Eye Mr. Ryder (he has a first name, but doesn’t care for it and does not share it). He is about to accept a high-profile assignment from a woman whose beauty is eclipsed only by her mysterious behavior.

It would appear there has been a suicide, although we still haven’t ruled out the possibility of murder. Ryder’s striking client Katrina Petruska (who works in kinky sex club), says she walked in on the bloody aftermath of her boyfriend’s collision with a power drill to his skull…11 times. The splash page containing the image of the dead boyfriend is disturbing, striking and I couldn’t take my eyes off of it. The stakes are high due to the high societal status of the deceased. Ryder knows that he has his work cut out for him, but he can’t begin to suspect what he’s going to uncover during his investigation.

As always, Radical delivers on lushly rendered art and top quality production, all with their eye on providing value on their traditionally higher cover price. Readers shouldn’t shy away from the $4.99 price tag: for 52 pages of glossy goodness, you’re still getting more bang from your buck than your average priced ‘Big Two’ comic.

I have only a few brief criticisms for this book. We’re treated to a rather in-depth psychoanalysis from an otherwise stoic and latently competitive Police Detective. This moment lacked authenticity. Also, the lush digital paintings have a tendency to leave the characters with an artificially waxy appearance.
Having said that, the positives for Ryder On The Storm far outweigh the minor stumbles. So much is happening within the confines of this sprawling plot that I’m anxious to see where the remainder of the series takes us. I can tell you personally that I’m in for the Ryde.

Ryder On The Storm earns an impressive 4 out of 5 stars.