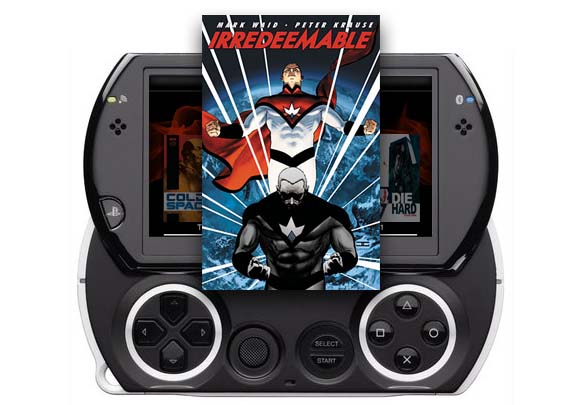 “Making our comics available on the SONY PSP shows our commitment to making sure comic fans everywhere can experience all the great comics we publish here at BOOM! Studios,” said Marketing Director Chip Mosher. “Working with iVerse Media, we are exstatic about reaching new customers on the SONY PSP platform and creating new BOOM! Studios fans and delighting our current fan-base that are already enjoying buying comics on the PSP.”

“BOOM! has a diverse and extremely high quality catalog of titles that we know Sony PSP fans are going to love,” said iVerse Media CEO, Michael Murphey. “It’s pretty easy to see how titles like 28 DAYS LATER, GIANT MONSTER, IRREDEEMABLE and COLD SPACE have an immediate crossover appeal to the hardcore gaming audience that Sony serves so well on the PSP. PSP owners are really going to love these books.”

It’s good to see a company going for diversity in their digital comics line, and save for an Android, Boom! pretty much has the digital comic distribution market covered.