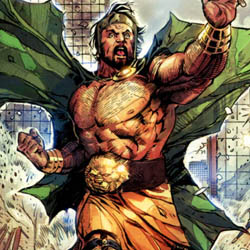 Or – “Raise Your Hand If You HONESTLY Thought He Was Dead…” Yeah, I didn’t think so. Previously, on Chaos War:  The half-deity known as Hercules stood alongside Captain America during the superhero Civil War, and stood on the side of The Hulk during the events of World War Hulk, leading to his interactions with Amadeus Cho, named by Reed Richards as the 7th smartest person in the world.  Their partnership was a fruitful one, allowing the occasionally shallow Hercules to show off his smarts and depth, while giving the socially challenged Cho a better feel for humanity.  Their battles eventually came to a head when Herc’s sister (and Cho’s benefactor) Athena manipulated them into an ambush by Hera, the evil step-mother who could never accept Hercules as her child.  Hera and Zeus were killed in the resulting battled, and Hercules was thought dead as well, leading Amadeus to nearly bankrupt Hera’s former company, The Olympus Group, to find his lost partner.  (Amadeus is extremely genre-savvy, and knows that death in comic books is a lot like marriages in soap operas:  A short-term ratings ploy at best.  His plan works, as Hercules is revived, and Amadeus is imbued with the power of a god (thanks to the manipulations of Vali Halfling, head of The Pantheon).  Knowing he can’t withstand such forces for long, Cho gives the ultimate power to Hercules, who then goes somewhat El Bonzo Seco, and cries that the Chaos King is coming!

Meanwhile, in the Dream Dimension, Nightmare, Lord of the Dream, watches the unconscious minds of Earth, and finding in them the thread that Hercules has returned from beyond.  Before he can turn this to his evil bidding, though, he is ambushed by the gawd formerly known as Amatsu-Mikaboshi, now going by the nom de guerre “King Chaos!”  Chaos rips out Nightmare’s heart, and laughs an evil laugh about his plot of evil going on it’s evil way.  It’s all very evil, I must say.  As for Hercules himself, his new power has made him a bit unstable, and he has teleported into the middle of New York City, where he screams for the heroes to join him, and prove their mettle!  ‘Course, he’s got  so much power that his every move causes devastation, cracking pavement with even the tiniest motions.  Iron Man and the Avengers arrive and threaten him (shades of Civil War Tony Stark here) only to find Amadeus hot on Herc’s trail.  It’s a very touching moment, as Cho talks his friend down, calming Hercules enough that he can stop shattering concrete with every move, and Hercules looking up, smiling, and saying, “Hey.”  Bromance ensues for a moment, before both Cho and Hercules (and Cho’s girlfriend Delphyne Gorgon) are teleported away by unseen forces.  The Avengers find the whole thing a bit stunning, especially seeing Hercules makin’ sense  and not being drunk.

Far off in a corner of the sky known only to those of massive power, the council of All-Fathers has summoned Hercules to their midst, only to find him more powerful than they ever expected.  He rages at the sky-gawds for their inability to do anything but protect their own powerbases, and begins punching out the various Highfathers with more of the awesome sound effects this series is known for.  (A shot for the new Asgardian leader sounds like “BALLLDRRR!”   HA!)  Thor arrives in time to keep Herc from doing any more damage, and the newly-empowered Lion of Olympus summons the heroes of Earth together in Central Park.  (That’s the FOURTH teleport sequence in the issue, mind you, a personal record for Marvel, if I’m not mistaken.)  He rallies the heroes of Earth, giving them a fragment of his power, and they all fly off into battle against King Chaos.  (Wasn’t that an Elvis movie?)  Thor and Herc lead the charge, but they’re surprised to find that all the mortal heroes are thrown into a coma thanks to the stolen powers of Nightmare.  Dun DUN DAAAH!  In a beautifully drawn backup tale, we see what Hercules was up to during his time in the alternate universe of CONTINUUM for those weeks that he was gone.  (Answer:  Punching the $#!+ out of things.)  The backup story has a full-on “Hell, YEAH!” moment for Herc, as he realizes that even if he’s alone in an empty universe, there are still monsters to fight and battles to win…  It’s a well-done bit.

The whole book really moves here, and we’re given glimpses of tons of Marvel heroes (The Thing, Doctor Voodoo, Emma Frost, The Black Panther and more have speaking roles) realizing the threat before them.  First we’re on Earth, then in the heavens, then back on Earth, then we’re flying…  It’s almost TOO action-packed for me, but the book redeems itself with strong characterization.  Amadeus Cho’s icy words for Iron Man, Thor’s rebuke of his old friends impulsiveness, and the reunion of Herc and Amadeus all play very strongly, and even cameos like Spider-Man work to the story’s advantage.  I like the art on the backup feature a bit more than the main story, where Khoi Pham’s stylized art is a bit scratchier than I like.  Still, it’s a well-crafted issue, and it’s high points more than balance out the lows.  Chaos War #1 earns a mighty 4 out of 5 stars overall, setting up our conflict without ever pulling plot points out of thin air, and giving the latest crossover madness a strong takeoff (with some turbulance for our heroes.)  It’s good to have Hercules back again…  Now, where in the heck is my Iron Fist?

Faithful Spoilerite Question Of The Day:  Hercules and Amadeus may be Marvel’s most well-adjusted father/son (at least in a metaphorical sense) duo.  Why do you think it’s so hard to do a male family dynamic in comic book terms?