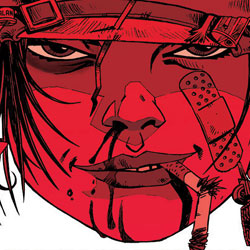 Gas up the tank, put your panties on your head, and hold on for dear life — everyone’s favorite postapocalyptic trouble maker gets a brand new stellar collection this December in TANK GIRL: WE HATE TANK GIRL from Image Comics!

Written by character co-creator Alan Martin and illustrated by impresario Rufus Dayglo, WE HATE TANK GIRL will be in stores December 1.

In TANK GIRL: WE HATE TANK GIRL, the Image Comics TANK GIRL one shots — DARK NUGGETS, DIRTY HELMETS and HAIRY HEROES — get collected with a bonanza of stories, posters, prose and extras. Featuring tales from Tank Girl’s past, present and future, and including the long-awaited CUT N’ DRESS BOOGA! Collected here for the first time, with never-before-seen bonus story, “Small Unit.” An unmissable must for Tank Girl fans of all hairstyles.