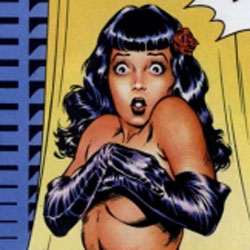 This week on the show; DCU MMORPG gets delayed, X-23 explained, Batman and Time Masters reviewed. Plus, The Rocketeer, Bettie Page, Dave Stevens and Rodrigo!

REVIEWS
Stephen
Detective Comics #869 Written by DAVID HINE • Art by SCOTT MCDANIEL & ANDY OWENS • Cover by PETER NGUYEN
“Impostors” continues here! Madness and mayhem face off against law and order for control of Gotham City, and not even the Batman is safe! With The Joker Impostor leading the charge of chaos and filling the streets of Gotham with his army of Jokerz, the ranks of the Batman Impostor’s army grow thanks to regular citizens choosing sides and taking up arms. But what is Impostor Joker’s ultimate goal – and what does it have to do with the real Dark Knight and Clown Prince of Crime?

Rodrigo
PILOT SEASON: THE ASSET #1 story FILIP SABLIK art DAVID MARQUEZ cover JENNY FRISON  Finding that someone special in the modern age isn’t easy; but online dating sites promise matches based on multi-faceted personality profiles. So what happens when you meet the woman of your dreams but she turns out to be more than what she seems? Madeline would be the perfect girlfriend if it wasn’t for the fact that she’s trying to get Doug killed.

The Time Masters have been coming up short in their search for Batman throughout the time stream, so Rip Hunter reluctantly turns to some experts on the subject…the Linear Men are back!

MAJOR SPOILERS DISCUSSION: Rocketeer
In 1938 Los Angeles, Cliff Secord, a local racing pilot and barnstormer, discovers a mysterious package hidden in his airplane. Prior to his discovery, the police have chased down and killed two gangsters nearby after a prolonged gun battle. In that package, Cliff soon finds what the police really have been pursuing: a stolen rocket backpack.