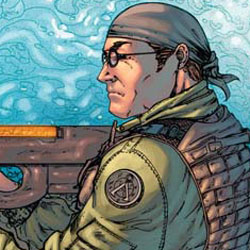 Dynamite Entertainment sent Major Spoilers a sneak peek of titles arriving in stores this week. Take the jump for The Dresden Files, Stargate, Green Hornet, The Boys, The Lone Ranger, and more.

THE DRESDEN FILES: STORM FRONT VOL. 2 #3
32 pages FC • $3.99 • Teen +
Written by MARK POWERS • Art by ARDIAN SYAF
Cover by ARDIAN SYAF
Lt. Murphy is the latest victim of the Shadowman’s magic and Harry is out to avenge his best friend. Can Harry stop the killer in time or is he destined to be the final victim?

The Dresden Files: Storm Front careens toward its shattering conclusion loaded with all the magic, mystery and adventure that make Jim Butcher’s novels a smash hit!

STARGATE: DANIEL JACKSON #3
32 pages FC • $3.99 • Teen +
Written by DOUG MURRAY
Art by JOHN WATSON
Cover by CHASEN GREISHOP
Daniel Jackson (Stargate’s very own cross between Sherlock Holmes and Mr. Spock) uses his powers to find a way to the location of the ancient treasure. While doing so, he has to deal with the Jaffa stranded by their God, and determine friend from foe–something that can be very hard to do.

GREEN HORNET GOLDEN AGE RE-MASTERED #3
40 pages FC • $3.99 • All Ages
Based on the stories by FRAN STRIKER
Art by BERT WHITMAN ASSOCIATES
Cover by JOE ROBENSTEIN
Whether you are a recent or long-time Green Hornet fan, this series of classic Green Hornet reprints will be enjoyed by fans of all ages! Featuring stories written by Fran Striker, these 40 page issues are re-mastered for the first time! Featuring a new cover by artist, Joe Rubenstein!

THE LONE RANGER #24
32 pages FC • $3.99 • Teen +
Written by BRETT MATTHEWS
Art by SERGIO CARRIELLO
Cover by JOHN CASSADAY
The beginning of the end. The Lone Ranger and Cavendish finally come face-to-face as Tonto must seek out family and old and new. Will The Lone Ranger take life and lose his soul, or die trying to keep it?

THE BOYS #47
32 pages FC • $3.99 • Mature
Written by GARTH ENNIS • Art by RUSS BRAUN
Cover by DARICK ROBERTSON
And it all comes tumbling down… Hughie’s nightmare begins as he finds out the last and terrible truth about Annie, with Butcher watching carefully from the sidelines. The Homelander calls a secret gathering of the clans- and marks the occasion with a particularly gruesome blood sacrifice.

But not if the time-lost Buck Rogers has anything to say about it! Deep under the Earth’s surface, atomic annihilators threaten to engulf the planet in molten ruin! While in the skies above, a fearsome floating city wields its own sun-powered death-ray! And to the Moon itself, where mysterious rebels cast lunar rocks like meteors to rain down upon a powerless planet! Armed with just his trusty atomizer pistol and an anti-gravity flight-suit, Buck may be the future’s ONLY hope!

“It’s a bold choice to leverage this forgotten period, and it pays off way more than a rehash of campy television.”
– Ain’t it Cool News

“The final issue is well worth a read, as it encompasses everything that made Buck Rogers a great movie serial, comic strip, and television series” – MajorSpoilers.com

“The art and the writing are lively. The latest version preserves the elements familiar to all who have heard the name Buck Rogers and the adventures are new.” – Comics Bulletin