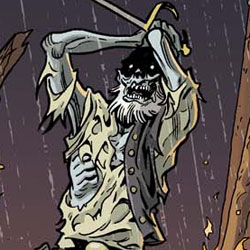 After reports of lower than average comic sales last August and reading of the blame being placed on the $3.99 price point, THE SIXTH GUN series creators Cullen Bunn and Brian Hurtt came to a decision: twelve extra pages at no additional cost.  For the sixth issue of their new ongoing series THE SIXTH GUN, Bunn & Hurtt are adding twelve full pages of gun-slinging goodness, and they’re enlisting the help of comic superstar colorist Bill Crabtree (INVINCIBLE, JACK STAFF).

“Having a colorist as accomplished as Bill [Crabtree] join the book was a no-brainer,” commented series writer and co-creator Cullen Bunn.  “Initially we were going to have Bill start with issue #7, it’s the beginning of a new arc and it just made sense, but Brian [Hurtt] had been plugging away at issue #6, and we started having the dreaded conversations of what to cut in order to keep the book’s page-count down.  When we saw the August numbers and read the reports, it just occurred to us: Why should we sacrifice the culmination of this great story and all our hard work?  The fans have been waiting for the climatic final battle; let’s give it to them!”

“I’ve penciled, inked, colored and lettered every issue and we’ve never missed a ship date on THE SIXTH GUN,” added series artist and co-creator Brian Hurtt. “but adding an additional twelve pages of story to a twenty-two page book for the final issue in this story arc is no small feat, and after six months of hard work, we’re not about to start missing deadlines now! We told Bill our idea for an oversized issue #6 and asked if he’d start in on THE SIXTH GUN early.”

“I couldn’t wait to get started,” said new series colorist Bill Crabtree. “I love THE SIXTH GUN!  Getting to play in this universe with these characters and settings is a real pleasure.  Cullen, Brian, and the folks at Oni are so passionate about the book. I’m really excited about the new arc and the oversized finale in issue #6.”

The 40-page oversized issue, THE SIXTH GUN #6,  is on store shelves November 17th. You can place your order now with your favorite local comic shop using Diamond Order Code: SEP101089.  THE SIXTH GUN #6 wraps up the first epic story arc of the series: General Hume is at the gates of the Maw and he’s brought Hell with him! It’s the final showdown between the forces of good and evil, and no one is safe. If Drake survives the undead battalion… if he defeats Hume’s malevolent henchmen… he’s still gazing down the barrel of a shoot-out with the Confederate general not even death could stop!

THE SIXTH GUN is a new ongoing series from co-creators Cullen Bunn & Brian Hurtt.  During the darkest days of the Civil War, wicked cutthroats came into possession of six pistols of otherworldly power. In time, the Sixth Gun, the most dangerous of the weapons, vanished. When the gun surfaces in the hands of an innocent girl, dark forces reawaken. Vile men thought long dead set their sights on retrieving the gun and killing the girl. Only Drake Sinclair, a gunfighter with a shadowy past, stands in their way.
Read the entire first issue of THE SIXTH GUN
http://www.onipress.com/previews/h/219

Oni Press Inc. is a leading publisher of independent, creator owned comic books. Founded in 1997 on the belief that comics can be used to tell any story, Oni Press has published hundreds of different comics and graphic novels. Their creator-owned comics have won numerous book, library, and comic awards. With a strong focus on character, genre, and story driver creator-owned work, Oni Press has become one of the most well respected publishers in the comic industry. www.onipress.com