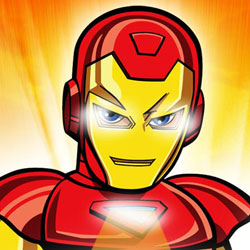 If you are a fan of the Super Hero Squad animated series from Marvel and Shout! Factory, you’ll be happy to know that the Quest for the Infinity Sword volume 2 will arrive on DVD November 9, 2010.

Take the jump for the complete breakdown of the DVD features, and get ready to Hero Up! Watch as Iron Man, Wolverine, Hulk, Silver Surfer, Thor, Falcon and their friends faithfully – and hysterically – protect Super Hero City from the wild, weird and even wacky villainy of VillainVille’s most infamous baddies, led by the sinister Dr. Doom! The Super Hero Squad Show: Quest For The Infinity Sword!  Volume 2 DVD features the second six episodes from Season One, plus all-new bonus features, including an interview with Tom Kenny (Iron Man, Captain America and MODOK), hero profiles, trailers and more. A must-have for heroes of all ages, this DVD is priced to own at $14.93 SRP.