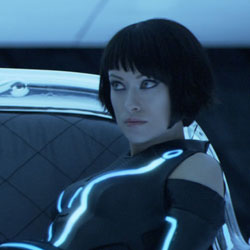 Disney is showing off new production stills and concept art from the upcoming TRON: Legacy movie, set to arrive in theaters on December 17, 2010.

Take the jump for the current gallery of images, and hopefully it will get you even more interested in seeing the film.

“TRON: Legacy” is a 3D high-tech adventure set in a digital world that’s unlike anything ever captured on the big screen. Sam Flynn (Garrett Hedlund), a rebellious 27-year-old, is haunted by the mysterious disappearance of his father Kevin Flynn (Oscar®- and Golden Globe®-winner Jeff Bridges), a man once known as the world’s leading video-game developer.  When Sam investigates a strange signal sent from the old Flynn’s Arcade—a signal that could only come from his father—he finds himself pulled into a digital world where Kevin has been trapped for 20 years.  With the help of the fearless warrior Quorra (Olivia Wilde), father and son embark on a life-and-death journey across a visually-stunning cyber universe—a universe created by Kevin himself that has become far more advanced with never-before-imagined vehicles, weapons, landscapes and a ruthless villain who will stop at nothing to prevent their escape.  Presented in Disney Digital 3D™ and scored by Grammy® Award-winning electronic music duo Daft Punk, “TRON: Legacy” hits U.S. theaters on Dec. 17, 2010, in Disney Digital 3D™ and IMAX® 3D.