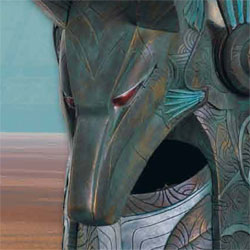 MGM and Propworx team for Stargate prop and costume auction

Propworx has announced that it is teaming with MGM to auction off many of the costumes and props from the Stargate SG-1 and Stargate Atlantis series.

Over 850 lots of props, costumes, production artwork, concept drawings, and set pieces will be on display Friday, September 24, culminating in the auction on September 25 – 26.  Most notable among the lots is the Lot 51: SG-1 Travel Stargate used during location shooting of Stargate SG-1 and in the second season of Stargate Universe. This huge prop is made of fiberglass and mounted on a welded steel frame and features working lights behind the chevrons and is 22 feet tall.

“Never in one place have so many beautiful props, costumes and set pieces from the Stargate franchise been auctioned at one time,” said Alec Peters, CEO and founder of Propworx, the premier Hollywood studio auction company in a prepared statment. “Stargate’s reputation as a visually beautiful and intellectually challenging series is on display at one of the most stunning locations on Earth, the Science Fiction Museum in Seattle. We are honored to bring this event to the loyal fans and collectors who have followed the series throughout its development.”