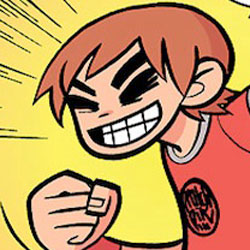 By Stephen Schleicher on September 20, 2010 0 Comments According to Oni Press, there are over one million copies of Bryan Lee O’Malley’s Scott Pilgrim series in print throughout North America.

“A million copies in print is a stunning achievement,” said Kuo-Yu Liang, head of Diamond Book Distributors. “It’s great watching Scott Pilgrim and Oni Press grow over the years.” The Scott Pilgrim series first hit shelves in 2004 and has since gone from an indie sensation to a New York Times bestseller and most recently adapted by Universal Studios into a major motion picture, directed by Edgar Wright and starring Michael Cera.

“All this for a little black & white book,” said O’Malley upon hearing the good news. “it’s an amazing success story for indie comics and I can’t thank the fans enough.” Creator Bryan Lee O’Malley and the Scott Pilgrim series have both been honored with multiple awards including the Eisner, Harvey, Doug Wright, Joe Shuster, and National Cartoonists Society Reuben awards, in addition to being named Entertainment Weekly and Wizard Magazine’s Independent Comic of the Year.

Oni Press Publisher Joe Nozemack said about the works, “I’m convinced that Scott Pilgrim will go down as one of those series that changed comics forever. When I’m out and see someone wearing a Scott Pilgrim t-shirt or sitting in a cafe reading one of the books, I get so excited about comics entering the mainstream and to know that Oni Press’ books are helping lead the way, it’s an indescribable feeling.” Nozemack founded Oni Press, Inc. in 1997 with the goal of publishing a varied line of comics and graphic novels that were missing from the market. Twelve years later, Oni is still fighting for diversity in comics by publishing one of the most eclectic catalogs in the industry.

I’m most interested in Joe Nozemack’s comments.  Will Scott Pilgrim be regarded as a series that changed comics forever, or is it simply a really great series that had its moment in the Sun, and will be remembered fondly?