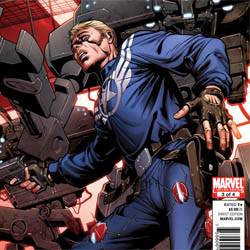 Or – “Is This The One Where They Find The Cap-Cave Under Stately Rogers Manor?” With the parallels between Captain America and Batman these days, I keep expecting Jarvis to come out, sew up Steve’s wounds and make a few snarky comments.  Or perhaps the Red Skull will shoot American Dream in the spine, causing her to become the nerve center of Avengers operations as Delphi?  Oooh, wait, I got it!  Fred Barnes, the dead Bucky from the Fifties will come back and try to steal Bucky’s identity from him, all the while acting as a villain called the Star-Spangled Shawl!  This is comic book gold, friends, COMIC BOOK GOLD! Previously, on Steve Rogers, Super-Soldier:  By my count, the origin of Captain America gets retold every five to ten years or so.  Each time, we are given new details (*coughretconscough*) of what really happened during the experiments of Project: Super-Soldier, now retconned to be the Weapon I project.  Oddly enough, this retelling has once again revealed heretofore untold nuggets of information about the origins of Captain America.  It seems that, unseen in any previous version, Steve Rogers fell in love with a mysterious woman during that time, and finds her near-double in a woman who is coincidentally married to the grandson of Professor Erskine (nee Reinstein), the developer of the Super-Soldier formula.  Erskine, Jr is assassinated, and a mysterious someone or someones has been revealed to be using the Super-Soldier formula to create his own musclebound goon squad, completely ignoring the psychotoic side-effects of the formula when used without the Vita-Ray treatment.  Tracking down the wife, Steve Rogers is shocked to discover that she’s not an undead Nazi spy at all, but a robot double, a pawn in a game engineered by one of his oldest and most dangerous foes.  Interested yet?  Read on!

Commander Rogers opens this issue with a reminiscence of his youth during  the Great Depression, as the other kids ganged up on him and beat him down whenever possible, just because he was skinny and sickly.  Flash-forward and we see why this thought has occurred to him, as Samuel Starr (aka the Machinesmith) has neutralized the Super-Soldier formula in his blood, reverting him to his original 90-pound-weakling state.  Machinesmith is, by Steve’s own description, a super-genius whose creations uploaded his brain into a robot form upon his death, leading to a mind that travels from machine to machine, “like the internet, only slightly more evil.”  Heh…   ‘Smith reveals that his plan all along was to use the deluded Erskine, Jr. to find the secret of why the formula has only ever worked on Rogers, which explains both how he knew about the pretty spy that Steve fell for and how he was able to create such an enticing trap.  Cap is knocked out by a burly SSF-enhanced thug and taken away, but there’s one thing that the Machinesmith didn’t count on, one thing that I’m sure will make every Captain America fan smile, and will support my theory that Batman and Captain America are actually the same guy:  He’s still dangerous, even if he’s just human.

Okay, it’s actually a little more ingenious than that.  When Machinesmith’s thugs try to move him, the former Captain America uses his knowledge of martial arts and combat to defeat them using nothing more than his shirt and their own weapons.  “[All my] training didn’t simply VANISH, just because Machinesmith somehow turned off the Super-Solder formula in me.”  Commander Rogers dispatches them all in a (pretty impressive) show of combat training, a sequence that Dale Eaglesham renders just beautifully.  Steve makes his way back to the lab and engages the assistance of the Robot-Duplicate-Nazi-Spy-Love-Interest, who has just enough faux-humanity in her to want to help him.  With her help and a dose of Vita-Rays, Captain America is back to his normal Triple H proportions, and lays into another squad of goons.  There’s some nice character work here, as well, as Steve takes the time to deliver the beat-down to the thugs because he can’t abide a bully, and resents them using Erskine’s formula as a glorified steroid.  It’s nice work all around, as Steve and Robo-Girl hit the highway in pursuit of the Machinesmith, who plans to sell the Super-Soldier formula to the highest bidder.

This series got off to a pretty slow start for me, with yet another shoe-horned 1940’s love interest (although she may be the same Nazi girlfriend that appeared in the ‘Adventures of Captain America’ miniseries in the 90’s) and some blah-blah-blah about Professor Erskine’s son, who should rightly be much older by any count that I can come up with, but it recovers nicely here.  This particular issue gives us more than we usually get from Steve “Elder Statesman With The Pep Talks And The Glayvin” Rogers, showing us WHY he’s so indomitable, and giving us a first-person narrative that lets us in his head.  Ed Brubaker is good with this character, and as much as I mock the whole “We’re better because we’re more human!” school of super-heroic thought, it works when it’s not overworked.  (Batman, anyone?)  My main complaints are incidental (we’ve seen the whole scrawny Steve-thing before, we’ve seen Captain America without super-soldier formula before, and by the way, didn’t they remove it from his system back when Mark Gruenwald was writing the book?) to the fact that it’s a good story, drawn well, and makes me like a character whom I historically enjoy more as part of an ensemble cast.  Steve Rogers Super-Soldier #3 did something a lot of comics never do:  It pleasantly (albeit mildly) surprised me, and earns a very respectable 4 out of 5 stars overall.  (Given the nature of the character, maybe it should be 40 out of 50?)

Faithful Spoilerite Question Of The Day:  Has Nazi superspy Cynthia Glass ever appeared anywhere else before?