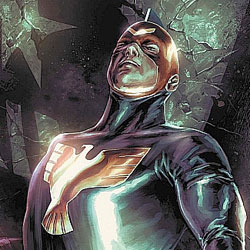 “Ah, where I grew up that’s just called a Yancy Street Hello!”

Understanding the connection between Captain America and the Patriot requires a little untangling of some complicated Marvel continuity. Before Marvel Comics was Marvel Comics, Captain America was running around performing heroic acts of Hitler-punching and generally thwarting the Axis’s best efforts at world domination. His exploits continued into the 1950s, trading the threat of fascism for communism. However, this caused a problem. Anyone who knows their Marvel history realizes that when Captain America was thawed out in the 1960s, the story was he’d been frozen since shortly before the end of World War 2. So who was wielding the shield against the Reds during the Eisenhower Era? In a classic case of retconning, it was decided that these appearances of post-WW2 Cap were actually other adventurers wearing Steve Rogers’ togs. Jeffery Mace was one such hero tapped for the honor. Originally, he fought as the Patriot during WW2 at the head of the Liberty Legion, the home front counterpart to the Invaders.

TWO-FISTED JUSTICE WITH A SIDE OF GUTS

The first issue of this miniseries is basically setting up Jeffery Mace to don the mantle of Captain America. It serves as a summary of his adventures as the Patriot, a costumed adventurer inspired by ol’ Winghead. Parallel to Steve Rogers, Jeffery Mace wants to contribute to the war effort, but is not eligible for military service due to his 4-F physical status. Unlike Steve Rogers, Mace doesn’t get any Super Soldier serum, and the Patriot fights solely with his own two fists and no small amount of guts.

The book isn’t quite perfect. Most of the action takes place via montage; the Patriot’s fights are summarized in news headlines rather than played out on the page. It’s a shame, because the brief glimpses of Breitweiser’s fisticuffs illustrations are quite good, and I’d love to see a fully drawn fight scene. The tightly compressed storytelling is due to the constraints of the four issue miniseries format rather than any authorial oversight, as Mace’s time as the Patriot has to be fast-forwarded so the bulk of the series can focus on Mace as Captain America. There are also some missteps with the art. The pencils and shadows are so thick that sometimes details are lost, particularly in the facial regions. There are a few cases of disappearing eyes that are a little too noticeable. But these are all small things – when I put this book down, I had a smile on my face.

Captain America: Patriot #1 really succeeds because both the art and the writing match the 1940s setting. Karl Kesel’s dialogue crackles with the energy of an old screwball comedy, with a good ear for old-timey slang that never sounds affected, and playfully alliterative newspaper headlines. While the fight scenes are lacking, the character interactions aren’t. I came away from this issue with a good feel for Jeffery Mace as an individual. Kesel aptly sketches out his hopes, dreams and fears, and provide some interesting interplay between Mace and his co-workers and fellow heroes. Kesel also takes an interesting tack with Mace’s political leanings – Mace clearly has populist sympathies, and I can’t wait to see how that will affect his role as Captain America in the McCarthy era.

The Breitweisers on art further deepen the 1940s feel of the book. Mitch Breitweiser looks like he’s been doing research on the period. The hair and clothing styles look dead-on. His pencil lines are heavy but energetic, while his characters are naturally posed. Betty Breitweiser’s coloring is dark and moody, with deep shadows reminiscent of a noir film. This gives the art a nicely muted feel, lending an air of gravitas to the proceedings. While the facial expressions could be a little clearer, overall the illustrations are lushly detailed and energetic.

This book is respectful of its Golden Age setting, while providing the depth of a modern comic. It describes the kind of World War 2 that only existed in comic books, where fascist fifth columnists lurked in every shadow and the only remedy was a two-fisted scrap followed up by some patriotic speechifying. It felt aged without being dated, and I’m excited to see how Kesel and Breitweiser handle the 1950s. Captain America: Patriot #1 has twenty newspaper headlines, fifteen Axis plots foiled, one black eye, one order of moo goo gai pan and one wwak. Four out of five stars. Check it out.