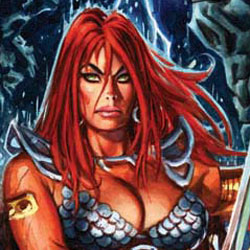 After a deadly altercation with the town bully, Sonja vows to keep out of the locals’ power struggles. But when the dead man’s brothers appear, all Hell breaks loose indoors as Mother Nature rages around them, threatening to awaken a long buried horror in the earth.  This issue also features reprints of classic Sonja material!

“I have been a Feudal Japan junkie since the old SHOGUN mini-series debuted on TV,” says writer Dan Brereton in a prepared press release.  “So I wanted to tell a story set in a place reminiscent of Medieval Japan and its seamy underworld, and having Sonja trapped in there seemed a great place for her to chew some scenery. The townsfolk in this story are pretty awful people, and its fun to watch them repeatedly underestimate and misjudge Sonja over and over again. They just cant take her at her word anymore than they can themselves be trusted. And of course, Sonja gets to cut loose and maim and kill as well, so I’m pretty jazzed to see this one hit the stands.”