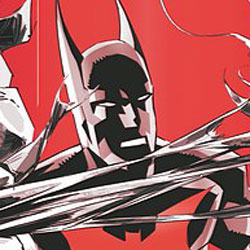 The new Hush is killing all the villains who are co-opting Batman’s old rogue’s gallery, which is odd, because this isn’t Hush. Or is it? Has Adam Beechen just blown our minds, or does the issue just blow? Previously in Batman Beyond: When Bruce Wayne stopped being Batman, Neo Gotham fell into disarray, with the criminal element running the streets. When Terry McGinnis took up the mantle of the Bat, he did good work, but tensions grew between the new Batman and his old mentor. Now a new villain is on the streets, usurping the Hush name, and killing old Batman foes in order to attract the attention of the old master.

This issue walks the line between a brilliant tie to the old animated series and a faulty attempt to be shocking. The really nice moments in the issue center around Terry and a battle worn Dick Grayson discussing the fallout between the Batman and Nightwing, and how his career came to an end. I like that Beechen is bringing closure to many of the open ended story lines that fans of the series have wondered about for years. Even seeing Bruce fail in his attempt to take control of the situation shows that he’s well past his prime as Hush takes down his Wraith droid with ease.

The problematic parts of the issue have to do with the Hush reveal. Readers are lead to believe that Dick Grayson is in the clear, but Hush ripping off his bandages and proclaiming “The Dick Grayson Era can truly being” causes a lot of confusion. Is this a doppel-Grayson? Is it Jason Tood? Clayface? Could it be Damian Wayne wanting to finally return things to the good ol’ days when he and Dick were the team supreme?

Beechen was the writer who received a great deal of flack for turning Batgirl Cassandra Cain into a villain in the Robin: One Year Later story line, and if he’s doing the same thing with Dick Grayson here, I expect the next month of his life will be filled with a great deal of heck. I could actually go along with an evil Dick Grayson if handled well going forward, it’s just the execution of the reveal in this issue that is problematic.

Maybe part of the confusion comes from Ryan Benjamin’s art. Through most of the issue Hush is drawn relatively thin and trim, but the final page has his chest expanding to that of a Charles Atlas competitor. But that is about the only major complaint I have about Benjamin’s art through this issue – for the most part I like what he is putting to paper. Nice framing and composition, the action and characters are instantly recognizable, the facial expressions work, and the nonverbal cues are dead on.

Color wise, I dig what David Baron does with the foreground and background colors. The alleys feel dark even in a megacity where light seems to penetrate the entire landscape.

BOTTOM LINE: IT COULD BE LESS CONFUSING

Batman Beyond #4 has one of the strangest most confusing endings of any book I’ve read this year – and I’ve been reading most of Grant Morrison’s stuff. Is the villain really Dick Grayson, a clone, Jason Todd, Clayface? The cover teases the villain revealed, and in a sense he is, but with art varying from artist to artist the revealed character could be anyone. Sadly, this “big reveal” hurts the issue for me, and Batman Beyond #4 only earns 2.5 out of 5 Stars.