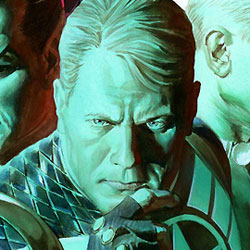 “The ghosts of the past are unquiet. Those who fought evil in days gone by must reunite to face it anew.” The new Invaders miniseries reunites the original World War 2-era Invaders team with mixed results. Issue #1 opens with a grotesquely distorted infectious zombie-thing wreaking havoc in a Dutch hospital. New director of SHIELD Steve Rogers grimly informs the readers that he knows what the threat is, but then refuses to specify the nature of the threat for the rest of the issue. The remainder of the book consists of the Golden Age Vision teleporting around in a green mist gathering together the rest of the Invaders to fight some nebulous threat that may or may not be steroid-abusing zombies.

Christos Gage’s writing on this book is uneven. There are some good character moments, like when Bucky (do we call him Cap now?) is helping the recently reborn Toro adjust to 21st century life. It’s also pretty cute when Anole and Rockslide bug the original Human Torch for an autograph, while Namor tries to make him feel relevant. But there are some choices that plain don’t work. There’s a big hash made about Jim Hammond and Toro feeling like men out of time, but they talk exactly like people from the modern era. At the end of the issue, we’re told that the original Invaders must fight this threat instead of anyone else simply because of “magic.” To boot, the actual nature of the problem isn’t ever stated. This means the plot feels largely arbitrary.

Caio Reis’s art is best when he’s drawing grotesqueries and action. His drawing comes alive when drawing infected hulking zombie types or N’Garai demons. His art isn’t as effective during the meat and potatoes moments. The heroes stand in artificial awkward poses during normal conversation, and the male faces just look too similar. The big reveal on the last panel is effectively ruined, as the heroes’ facial features run the gamut from stoic to nonplussed (except for Toro, who has the good thinking to cover his face with his hands). There’s also a weird quirk where people’s noses are repeatedly colored pink or red, making it look like everyone is drinking heavily off-panel.

WHERE ARE THE NAZIS?

This is a frustrating book, because it could be so much better. Gage writes some really good character moments, like a funny bit where Toro mistakes a Bluetooth-using businessman for a crazy guy, but undercuts it moments later when Toro blurts out an anachronistic “Hell yes.” There’s an interesting story somewhere in here, but it doesn’t feel well thought out. This issue just puts the pieces on the board, but the stakes never feel high enough for the threat to be meaningful. The Invaders are largely defined by their antagonists; their deal is they’ve pretty much been fighting Nazis for over 60 years now. They’re less superheroes and more super-powered soldiers still fighting World War 2. But in this book, we have no idea who the bad guys are, and there isn’t enough of a mystery here for that to work. Also, exclamation points in titles are hella lame.

If you have a great love for these classic characters, you might want to check it out, but otherwise, Invaders Now! doesn’t really justify itself. Invaders Now! contains two dweeby Young X-Men, two decapitated demons, one gigantic mutated sea turtle, one immolated genocidal dictator, and a whole lotta green gas. Two stars out of five.