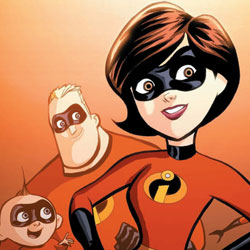 BOOM! Studios sent Major Spoilers a sneak peek of Donald Duck and Friends #358, Farsccape #11, Muppet Sherlock Holmes #1, and many more that you can check out, after the jump!

Academy Award-nominated screenwriter Kim Krizan (BEFORE SUNRISE, BEFORE SUNSET) tells a tale of CBGB like no other! Some reach back to the 70’s but this is a tale of youth and rock ‘n’ roll that goes back much farther! All beautifully illustrated by Toby Cypress (THE TOURIST, BATMAN: GOTHAM KNIGHTS)! With a time-travelling back-up story sure to rock your world!

The final Double Duck arc ends here as we prepare for a brand new story in Donald Duck & Friends! The world’s favorite feathered federal agent, Donald Duck, is undercover in Egypt face-to-face with the would be kidnappers of former Agency chief, Felino Felinys. It’s going to take some slippery work to get them both home safely, all while protecting the Agency’s biggest secrets! The exciting conclusion to the fan favorite saga! Featuring the hilarious backup story “Bugged Duck!”

The Peacekeepers are making a deal with a nefarious new race of creatures that could mean destruction for all of the Uncharted Territories. Crichton and Aeryn must stop them…but that’s going to be hard to do stuck inside a PK prison cell, as ordered by none other than Grayza herself! From show creator Rockne S. O’Bannon.

“Once you eliminate the rational, whatever remains, no matter how absurd, must be the Muppets.” Join Gonzo as Sherlock Holmes, the world’s greatest detective (19th century champion) and his associates Dr. Watson (Fozzie) and Inspector LeStrade (Kermit) in this issue as they embark on “The Adventure Of The Speckled Band.” Includes a bonus mystery game, “Where’s Moriarty?” A not-to-be-missed miniseries that takes your favorite Muppet characters and drops them right into the exciting world of Sherlock Holmes! Cover by Mouse Guard’s David Peterson!

The bloody conclusion is at hand! Cole’s past finally comes to light, but will it put the only family he has left into danger? On the brink of the end of the Civil War, there’s just one last standoff between Cole and freedom. The final issue of the critically acclaimed series from the writer of the best-selling 28 DAYS LATER.

In his quest for revenge, Cormac FitzGeoffery finds himself caught in a web of betrayal… one that can only be reconciled with blood. Don’t miss the savage conclusion to BOOM!’s epic series based the story by Robert E. Howard! Featuring a cover by fan-favorite THE SAVAGE SWORD OF CONAN artist Joe Jusko!

Alan Porter returns with an all new, original adventure with your favorite Disney/Pixar’s World Of Cars characters. Lightning McQueen organizes a Radiator Springs rally race to raise money for his favorite charity, but finds some of his old rivals are feeling somewhat less than charitable!

Mrs. Incredible faces an unwelcome figure from her past plotting to destroy all of Europe; what’s worse, they share a secret history she doesn’t want Mr. Incredible finding out! Will the mysterious Mirage keep her secret, and can she be trusted to watch Mrs. Incredible’s back? Meanwhile, Mr. Incredible and Frozone take it upon themselves to train Dash, and Violet makes a mistake that may have unexpected consequences for the Parr

Super-villain Max Damage had an epiphany the day he watched the Plutonian go rogue and slaughter millions. Humanity needs a savior… and Max is determined to be Incorruptible. But it’s hard to stay noble when the world still thinks you’re at the top of the criminal food chain. Join Kingdom Come’s Mark Waid for the companion to his Eisner Award-nominated series Irredeemable!