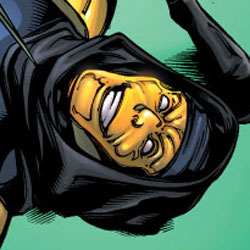 Bruce Wayne is about to return to the DC Universe, and that can only mean one thing – time to create a great jumping on point for new readers! Previously in Red Robin: In order to take down the scum of the Earth, Tim Wayne decides to create his own list of enemies he needs to eliminate in order for him to move on with his master plan. Things were going well until Anarky makes a reappearance with a list of his own…

The Anarky most of us grew up with is no longer the Anarky going around killing people. Instead, it’s Ulysses Hadrian Armstrong (aka The General) a former Batman foe, now bent on taking down Red Robin. In order to remove his foe from the battlefield, Anarky thinks it best to come up with a list of anyone who could possibly be Red Robin and kill them one by one.

By the time Red Robin does catch on to what Anarky is doing, four teens are already dead, and Ulysses is convinced his last kill will remove Red Robin from his life forever. Of course Tim’s fake assassination attempt threw a wrench in Anarky’s scheme, and it turns out he’s going after the wrong guy. Good thing Red Robin shows up at just the right moment to stop Ulysses’ nefarious scheme.

There is a bit of fighty-fighty in this issue, and ever the tactician, Anarky gets the last move, by triggering a bomb in his lair. Big deal, you say – but Tim has become friends with the former Anarky (Lonnie Machin) and the incapacitated villain is a captive in Anarky’s lair. Tim does the right thing by choosing to save Lonnie’s life while letting Anarky escape. The let the villain run to fight another day story feels like something that we’d see in an 80’s Batman book, so maybe the trope is actually being used correctly here.

I generally like Fabian Nicieza’s writing. He is able to take characters and give them interesting things to do, and while some of the plot points seem a bit shoehorned in at times, I’ve liked what he’s done with The Hit List to this point. The problematic part of this issue is most of it feels like a highlight reel of past episodes. While this might work in Happy Days, or Family Matters, getting a recap like this in issue sixteen gives me an uneasy feeling. On the one hand, this issue can serve as a great jumping on point for new readers eager to grab anything and everything Return of Bruce Wayne related, but on the other, this issue almost feels like someone is about to swoop in and tell us everything we’ve known before is wrong, sir. Wrong!

MARCUS TO DOES RED ROBIN RIGHT

Marcus To really delivers when it comes to the art in this issue. Characters get dramatic poses, and even the villain gets his Hand Clenched Moment in the Sun to Laugh Manically and Carry on with His Crazy Plan. To also serves up panels that are full of actual content instead of Adobe Photoshop color gradients. Even panels that look like a gradients are revealed to be out of focus (read Adobe Photoshop Blur effect) images of the background. It’s a simple idea, and one I’m surprised other artists and colorists haven’t picked up on before. In To’s hands, Gotham City goes on forever, and feels like a city full of history and life. Even the bit characters standing around have something to do in each scene. While I don’t really care for the clip show aspect of this issue, the art more than makes up for it.

If you’re an avid reader of Robin and Red Robin, the only reason to check this issue out is to see Tim and The General/Anarky duke it out and attempt to come to terms with the reason Anakry is so upset to begin with. Otherwise, issue kind of feels like a Wikipedia entry. Granted, it’s a very well crafted Wikipedia entry with plenty of flourish, but there really isn’t anything outstanding. The issue is worth checking out for sure, and if you are completist, you’ll want to pick it up. I liked Red Robin #16 enough to give it 3 out of 5 Stars.