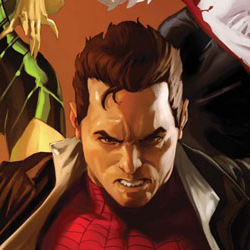 For the past year, I have avoided the Amazing Spider-Man title, having heard from all corners of my local comic book shop that it was more than lacklustre. My hopes for the book were re-kindled, however, when I saw that Mark Waid was to write it. Has Waid delivered his usual high standards of writing? Find out after the jump! All the Best Plots Come Through a Window

I’ll skip the ‘Previously, on’ bit on account of the fact that I have no idea what’s been happening in the title. So, this issue opens with a group of Spidey villains being brought together by an un-revealed person, tasking them to seek out an unnamed (to the audience) item – an item which promises to perform miracles. Meanwhile, Peter Parker is in a bad place: he was recently involved in a scandal that cost him his job, and now no one else will hire him. He does, however, have a date, which is rudely interrupted when Lily Hollister – Harry Osborne’s former lover who ran off with his father – bursts through the window, heavily pregnant. She is being followed by villains Tombstone and Shocker, and we discover that their mysterious employer is none other than Doc Ock – and he’s after Lily’s baby!

I went into this book with high expectations – Waid is a favourite writer of mine, and I was hungry for some well-written Spider-Man – and it certainly did not disappoint. For starters, I thought it was very well paced: setting up a mystery at the beginning, then moving to slow build-up as we follow Peter for a while, until the plot literally crashes through the window at our characters. There are panels which exist as obvious exposition-dumps, where Peter’s train of thought fills us in on past events, and these may become tiresome to readers who are up on recent continuity, but I found them extremely useful and they, along with the occasional editor’s note, ensured I had no problems following the story.

The dialogue feels natural throughout, not to mention funny when it wants to be, and the book maintains a pleasant lightness of tone during the Peter Parker section, but shifts to something more serious when Lily arrives, although Spidey still retains his trademark wit. The reveal of Doc Ock is also very well done (for which the art, of course, also deserves credit), and Harry Osborne is well written during this sequence, displaying plenty of emotion. Overall, this book is a great first part of a storyline: it sets up our world and characters so that all the readers are on the same level, and provides a major plot point for things to revolve around. What’s more, it doesn’t feel padded – this is a first part of a story where it feels like things are actually happening, rather than just wasting time until the last few pages when things can get going in order to set up the next issue.

The art is very much something I didn’t expect to see in such a mainstream Marvel book. It’s very stylised, distinguished by its use of bold colours – it’s something I would have more expected to see coming out of one of the smaller publishers and, I must admit, on first opening the book the art turned me off, but over time it really began to grow on me and looking at it now it’s something I really enjoy. There’s a vibrancy to it, the colours seem to come off the page at times and quite simply it’s a style I find myself rather liking. There are also some good facial expressions, and the aforementioned Doc Ock reveal is very well done – a great page to look at – and Doc Ock himself looks very creepy; the subsequent action sequence also flows well and is always clear. I’m sure it’s not a style that will appeal to everyone and it may, perhaps, even be a deal-breaker for you, but at least it’s different: it’s something apart from the run-of-the-mill style that we see in so many mainstream super hero books, and it feels good when a big title such as this distinguishes itself so.

There is also a two page back-up feature in this book, written by Stan Lee himself. It’s a parody of the usual Spider-Man situation: Spidey confronts two villains, but one takes the other hostage, demanding to see Spider-Man’s time machine. The whole thing is a bit over-the-top, but it’s two-page length ensures it doesn’t out-stay its welcome, and the entire piece is fairly amusing. The time machine line, coming right at the end, is wacky and random enough to elicit some laughs and I fully expect more crazy fun next issue. It’s pretty well drawn, too, in a style appropriate for the writing.

The cover, in contrast to the interior art, is very much something I would expect to see on a book like this, and depicts Peter Parker with his Spider-Man shirt on, with various villains in a variety of poses behind him. It looks good, definitely, but it fails to impress on account of being generic and thoughtless. None of the villains on the cover appear in the book, except at the gathering right at the beginning, and the cover doesn’t give any real hint as to the plot or contents of the book – it is a disappointing waste of the obviously-talented artist.

A Book Worth Reading

This book both delivered on and defied my expectations, all in a pleasant way. I was expecting the writing to be of a high quality, and it was; I was expecting the art to be good, but generic, and it was of a distinguishing style. If, like me, you’ve been staying away from everything Spider-Man for a while, then rest assured this book is a great purchase, and if you’ve been following the Spider-books, then I find it hard to imagine how this book could displease you (unless the art is not to your tastes). I give this book a hearty recommendation, and four and a half stars out of five.