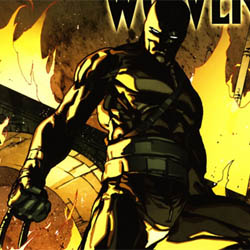 Or – “We Could Call Him Wolver-Teen…” …but that’s probably actually X-23.  Unless she’s Wolver-Tween?  I don’t know anymore, I’m reviewing a mutant book that’s a spinoff, I’m lucky to realize which way is up. Previously, on Daken – Dark Wolverine:  Years ago, the man born James Howlett (alternately known as Logan, Wolverine, Patch, and Mary Sue) had a relationship with a woman called Itsu.  As happens to every woman who gets within ten feet of Logan’s fuzzy hide, she was horribly murdered by an old foe with a grudge, and her child was eventually carried into the hands of a wealthy Japanese family.  Though he has a name, most everyone knows him as Daken, meaning “mongrel,” which leaves him with a less-than-warm personality.  Eventually, young Daken tracks down Daddy Dearest and systematically tortures him, even stealing the mystical Muramasa blade that can kill regenerating folk like himself and his old man, the better to go all Oedipal with.  After a run in the Dark Avengers, the kid gets in a few good moments, notably a face turn against Norman Osborn, and the murder of Frank Castle, before his past caught up with him.  Now a couple of claws short, the son of Logan embarks on a new career as Mega-Damage Wolverine and possibly finds himself turning on the path towards redemption.  Or, at least as much redemption as a cold-blooded mass-murdering psychopath with a mohawk and hand claws can get…

The Best There Is At What He Does, Mark II

Our story starts 50 years ago, as a drunken artist-who-will-eventually-be-known-as-Wolverine stumbles out of a bar after murdering a man.  As he is accosted by what may be a terrified widow, Wolverine is unaware that he’s being trailed by someone with a scope rifle.  Before the sniper can attack, though, Daken appears and tells him that they both have time to kill the old man, and lets Wolverine drive away unscathed.  Cut to present day, as we spy on a tender moment for Daken (schtupping a model in the dressing room) before we see him hitting on an old man, talking to Johnny Storm on his cellie, and suddenly facing down a gang of masked aggressors.  I’m troubled by this whole sequence, actually, though it serves to give us an interesting look into the mind of Daken, especially as he gently chides models for not eating.  (But when did Daken get to bond with the Human Torch?  Did I miss a crossover somewhere?)  The Son of Wolverine kills all but one of his attackers in seconds, leaving the survivor to beg for mercy.  “Please…  I’ll tell you anything!”  Daken replies, “I already know everything.”  I kind of wish I did…

Daken immediately seeks out an old friend (possibly the man from the opening sequence) and they discuss who failed to hold up their end of the bargain, and whether or not Mystique has turned on them.  Daken reveals that he told Mystique the truth (about SOMETHING) and sent her off on a tangent of her own.  “I want it all,” says Daken with an evil smile, and muses that the best way to do that is to make sure no one else has anything.  Someone is murdered in Milan for a page, then Daken returns to San Francisco and dons his new battlesuit, the better to get himself out of the shadow of his famous father.  (Given that Daddy is 5’3″, it must be late in the afternoon if you’re stuck in his shadow.)  Daken stands on a rooftop and monologues that everyone needs to beware the fury of the patient man.  The last EIGHT (!) pages of the book are a quick recap of the life of Juniorine, revealing that he’s over 60 years old, has served as a secret enforcer for decades, and that somewhere in the Marvel Universe there’s a man named Cyber whose real name is “Silus Burr.”  Which may be awesome, or awful, I’m not entirely sure that I know which.  It actually clears up a lot about the character, and helps to explain some of his motivations…

What He Does Still Ain’t Pretty…

Still, I’m concerned that even after a third of the issue takes place in an expositionary flashback, there’s just not enough substance here for me to get truly hooked.  My friend Tom Grice (who is WRONG, sir… WRONG!) was right on the money here when he described Daken as “Mega-Damage Wolverine.”  (Back in the day, Palladium Games had “Mega-Damage” weapons and structures, a hundred times as powerful as regular structural damage, for those whom just being able to smash entire buildings wasn’t quite enough.)  No matter how wonderfully Daniel Way and Marjorie Liu write the book, there’s a fundamental issue for me with the character, who comes across as Wolverine with a twist here and there.  Rather than Daddy’s love of beer and karaoke, he enjoys opera and fine wines, in lieu of Papa’s tortured samurai routine, he has a Randy Orton psychotic-viper personality.  Giuseppe Camancoli does well with the art, but his work is muddied somewhat by heavy-handed inking and dark smudgy colors, making me feel like I’m reading the book through dirty glasses.  Overall, it’s a competent piece of work that seems to be supporting my theory that Marvel wants all of its heroes to be the head of a hero family, with versions of them for all demographics.  Daken – Dark Wolverine #1 is probably a better book for those that love Wolverine and his offspring, but still manages to pull of 2 out of 5 stars overall from me.

Faithful Spoilerite Question Of They Day:  With the proliferation of Hulks, Spider-Man and his amazing namesakes, the Captain America Corps and Iron Man’s entire supporting cast getting armors of their own, which Marvel character should be next in the progression?  (I’m looking forward to Punisherette, Punisherina, and Li’l Punny with his water pistol full of grape soda…)