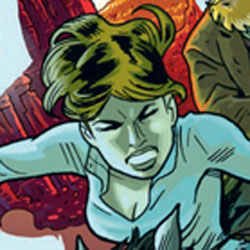 In stores today is the fourth issue of Oni Press’ Sixth Gun series.  The company sent along a sneak peek that you can check out, after the jump.

Sixth Gun #4 – In stores 9/8/2010
Writer: Cullen Bunn
Artist: Brian Hurtt
Format: Standard, Full Color
Page Count: 32
Price: $3.99
Genre: Western / Fantasy
Age Rating: T – Teen
Solicit Text: Drake Sinclair springs a trap on General Hume and his minions. But when dealing with something as temperamental as a wild Thunderbird spirit, nothing goes according to plan. Drake, Becky, and Billjohn are caught between their enemies and a primal force of super-nature. Plus, what exactly is Drake’s connection to the undead General and the Six?