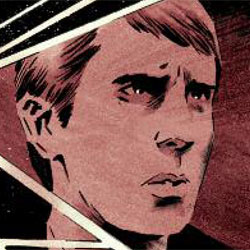 With five days to die, Ray Cricara doesn’t have a lot of time to screw around if he hopes to bring in the man whom he believes ordered a hit on him and his family. IDW Publishing continues their month long story with another installment of 5 Days to Die. Previously in 5 Days to Die: Ray Cricara, his wife, and his daughter were hit by a truck. Ray’s wife died in surgery, his daughter is in intensive care. Convinced that his nemesis, Hoverman, is behind the accident, he abandons his daughter and seeks revenge, even though he only have four days left before he dies.

It’s good to see that Ray has at least somewhat come to his senses and decided to stay with his daughter until she wakes up, but the lingering feeling that the whole attempt on his life by Mr. Hoverman still bothered me going into this issue. Schmidt proves that point by introducing readers to the mafia boss and proving Ray is imagining the plot in order to cope with loss and tragedy…or is he? It’s almost like Ray’s brain damage is causing him to become paranoid, which is an interesting character twist as Ray wants to stay with his daughter, but something inside him is forcing him to flee and kill those whom he believes wronged him.

With the previous issue fresh in my mind, this issue continues to push the hero with an agenda, but one who is totally off the rails, and it is somewhat disturbing to see a character who is reacting this way – believing he is right, when it appears he is totally wrong.

This time instead of Schmidt providing an analysis of his work in the back of the book, the duties fall to series artist Chee who steps in to give his views on the book. I find this quite interesting, and would really like to see others provide thoughts and opinions on their work.

Chee’s art continues to shine in this book, as it doesn’t look like he was rushed at any point in the process. I still like how the color wash changes from cool tones to a red hot one when the violence escalates.

As far as second issues go, this is a pretty good followup to the opening chapter. As a second issue in a “stunt release” the issue holds strong and it doesn’t feel like the series is being released over the course of a month as a gimmick, but rather there is a real urgency to get the tale told. The writing holds strong, and Chee’s art is excellent, and since there really isn’t a long term commitment from this series, it is well worth picking up. 5 Days to Die #2 earns 3.5 out of 5 Stars.