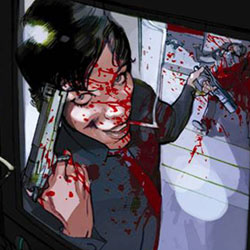 Radical Publishing sent Major Spoilers a sneak peek of The last Days of American Crime #3 and Radical Premiere: Mata Hari. There’s a mature warning on this sneak peek, so be prepared if you take the jump.

The heist of the century is finally here. With his team together, his scheme in place and the score set, Graham, at long last, is ready to pull off the last and greatest crime in the history of the United States. But even if the plan goes off without a single hitch, what can he do when the American Government decides to activate their anti-crime broadcast during the job. Will the last day of American crime end with Graham and his team as millionaires, or will they spend the rest of eternity wondering where they went wrong?

The stunning conclusion to the critically acclaimed miniseries written by Rick Remender (Punisher, Fear Agent) with art by Greg Tocchini.

What is the secret story behind femme fatale Mata Hari, the most famous female spy in the world? Through the account of a humble eighteen-year-old girl, discover the secrets of the famous heroine, her covert missions and the love that made her lose everything.