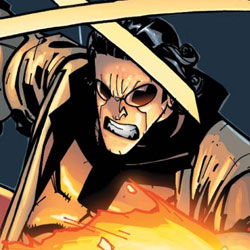 “My name is Aaron Stack and I am not amused.” I’ve been out of the comics reading pastime for a few years and have only recently gotten back into the shops. There’s always been a soft spot in my heart for Deadpool. The character has a lot to offer: a great costume, pulpy action, and (in the hands of a gifted writer) a propensity for laugh-out-loud moments that are too often absent in an overly mope-y comic book landscape. And don’t forget those stylish yellow word bubbles! Imagine my delight when I walked into the comic store and saw a plethora of Deadpool titles. Not only did he have his own solo title again, he had his own team book consisting entirely of alternate-universe versions of himself! My delight quickly turned to dread as I saw just how overexposed the Merc With A Mouth is. In 2010, Deadpool has already had or is scheduled to have four one-shots, four limited series and four ongoing series (five if you include the upcoming Uncanny X-Factor), along with a good number of guest spots. Since when is Wade Wilson a bigger star than Tony Stark?

I’ve picked up a few Deadpool books in recent months with trepidation, and found them to be largely devoid of value. The character that was once a quirky breath of fresh air in the world of overdone superheroics has become dangerously ubiquitous. Omnipresence isn’t as jarring when you’re dealing with an iconic character like Spider-Man or Wolverine. Their popularity may wax and wane, but they’re iconic for a reason. They can be plugged into team books or carry a few solo titles without much stretching. But Deadpool is a little too weird for this formula to work right – and unless you have someone truly talented writing him, such as Joe Kelly, Gail Simone, or Fabian Nicieza, Deadpool rapidly becomes more annoying than fun. And if readers start getting annoyed with the character, it kills the golden goose. So while Deadpool is one of my all-time favorite comic heroes, he comes with a few caveats.

When I saw that Machine Man was going to be guest-starring in Deadpool Team-Up #890, I couldn’t resist. I loved Warren Ellis’s reimagining of Aaron Stack as a drunken, surly robot supremacist in the pages of Nextwave, and his subsequent use in the Ms. Marvel series. Machine Man would be a perfectly bizarre foil for Deadpool’s antics. However, this issue felt more like a missed opportunity than anything else. Part of the fault is with the writing. I’d read an issue or two of Team-Up before but forgotten due to all the other Deadpool errata I’ve devoured recently, which meant I also forgot how annoying James Asmus’s use of dueling internal monologues is. Tics like that are what can separate an entertainingly surreal character from a wacky, crazy-for-crazy’s sake character.

The bulk of the story focuses on Machine Man filling the role of an insurance ‘agent,’ finally come to collect from damages from Deadpool for all the collateral damage he’s done over the years. As an aside, casting the now perpetually pissed-off Machine Man as an insurance agent actually makes perverse sense. After the obligatory fight, Machine Man offers to let ‘Pool exchange services for debt relief, namely rescuing some Bernie Madoff-types from some very disturbing comeuppance at the hands of an oddly androgynous Puppet Master. The story is slight and inconsequential, which is not a problem for a book that’s supposed to be fun. But it is a problem when too many of the jokes fall flat.

While Asmus’s writing and jokes are hit-or-miss, the art deserves a look. Micah Gunnell draws some very funny fight scenes, and especially exhibits a good sense of visual humor in how he depicts Machine Man’s powers. Aaron Stack’s arms and legs extend on coils that wrap through and around panels, acid shoots from his neck, strange prostheses morph from various body parts. Gunnell also manages to draw an expressive Deadpool without making his mask look weird, something other artists have attempted and failed. The overall panel layout is creatively used to enhance the action; it’s dynamic without being overly stylized or cluttered. The colors are brightly appropriate for the subject matter.

Kudos aside, this is just another middling entry in the growing Deadpool canon, which in turn is rapidly becoming inessential reading. The art elevates this from being a slog to at least passable entertainment, but ultimately, this is an optional book. The skyrocketing popularity (or at least marketability) of Deadpool makes me wonder who will be the next Marvel star to break out of obscurity. Will Moon Knight join every Avengers team and round out the Fantastic Four? Will Slapstick get his own weekly series? Does anyone remember Sleepwalker?