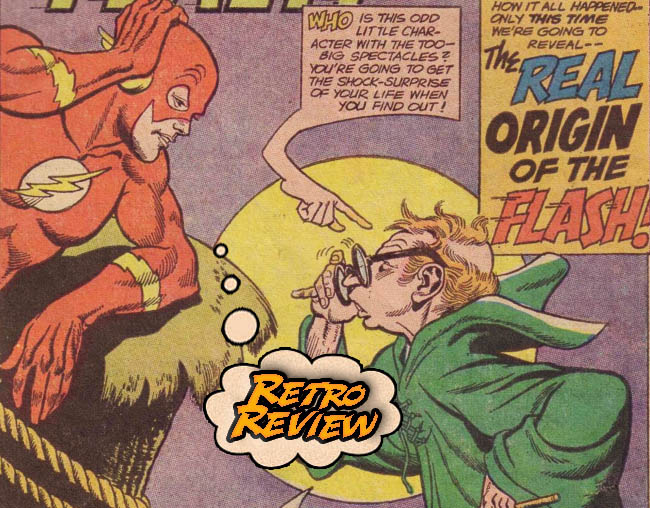 Or – “They Never Retconned It, Faithful Spoilerites…  Under Wolfman’s Law, This One HAPPENED!”

I can fix that for ya. Previously, on The Flash:  Barry Allen was always known for his lateness.  The slowest member of the Central City Police Department, B.A. never really established himself as much more than a schmuck in the trenches, a Bunsen Burner jockey whose bow tie hid a deep reservoir of boring.  But when a bolt of lightning arced into his lab one fateful night, the combination of electricity and “nearly every chemical known to man” gave him superhuman speed powers.  A fan of comic books since he was a child (growing up reading the adventures of Flash Jay Garrick, who was eventually discovered to be a real personage on an alternate Earth) Barry created a special costume, a ring to keep it in, and set out on a second life as The Flash, fastest man alive!  His debut opened a floodgate of new superheroes, unseen since the days of the Second World War, and quickly he became a founding member of the Justice League of America, gained a kid sidekick with identical powers, and amassed a Rogue’s Gallery of petty crooks with special gimmicks.  But have you ever wondered exactly where that bolt of lightning REALLY came from?

The docks of Central City.  Nightfall.  A group of jewel smugglers attempts to ply their illegal trade, trying to import the legendary Heart Diamonds into the country that they can fence them.  Of course, Central City is also the home of a certain Scarlet Speedster, who doesn’t take kindly to criminals on his home turf… With his powers malfunctioning, the Vizier of Velocity is forced to leap into the nearby river (had this been the East River, it might have burned to the ground) to quell the flames.  But what in the world could have made his powers go berzerk like that?  Well, thereupon hangs a tale, Faithful Spoilerite… Mopee explains tetchily to our Flash, the same way you might educate a recalcitrant child on what REALLY happened:  Dispatched to Earth by his superiors in the heavenly helpmates, Mopee’s first job was to find a man worthy of the gift of super-speed, and empower him to be a hero to the masses.  Barry was his first choice, and KABLAMMICUS!  Lightning bolt, chemicals, hoocha hoocha hoocha… LOBSTER.  But Mopee’s neophyte status kept him from recognizing a particular Helpmate bylaw… The Flash considers just giving up his powers, but then remembers his various successes.  No one could stand against the Rogue’s, no one would have saved Iris from certain death, no one could have discovered Earth-2 and met Jay Garrick…  No, Barry decides, it is necesary that he remain the Flash, and forces Mopee to dig through his handbook for a loophole… Mopee places Barry’s ad in the newspaper (because there wasn’t any internet in the 60’s, children…  Truly a fate worse than death.) with the addition of a line that reads “Have wife to support.”  Because THAT couldn’t possibly have negative consequences at all…  Being the man that he is, Barry finds a way to earn his hundred bucks AND do a little bit of a good deed on the side. As he makes the last run, though, Flash’s aura fails thanks to Mopee’s inferior magic skills, causing the package to burst into flame.  As the plastic inside melts, Flash finds… The Heart Diamonds!  The criminals stashed their booty in a plastic toy when they escaped from him at the waterfront earlier.  With his powers still on the fritz, Flash takes out after the smugglers, only to have one of them shoot at him.  Will his vibratory powers work long enough to keep him from an overdose of lead poisoning? Well, of course they will.  Barry didn’t die until 1986. Duh?  As Mopee rushes away to excitedly become a Ninth level initiate, Barry suddenly calls after him, asking about how KID FLASH got his powers!  (Wally was coincidentally struck by another lightning bolt months after it happened to Barry, which is the equivalent of being struck by lightning while winning the lottery as a functional hermaphrodite.)  Duh dun DAAH!!!   Speaking of Kid Flash, he’s got a backup story here, during which he uses his powers on a lark and discovers a crime being committed in his high school janitor’s closet. Blue Valley, Nebraska, is a pretty crime-ridden place for a small town in the middle o’ nowhere.  The sudden appearance of a teen superhero causes consternation for one of his teachers (who is also a hypnotist, apparently) but Kid Flash is a polite young lad, and takes the time to explain his super-speed joyriding… Again with the endangering the secret identity?  These people need to work on their security somewhat…  The issue ends with everybody happy, the status quo upheld, and everything Silver Agey and stuff.  Next issue, they’ll never even mention this happening.

Everything You Know Is Wrong

In fact, this has NEVER been mentioned in official continuity again, despite being referenced a time or two in supporting media.  Who’s Who in the DC Universe goes out of it’s way to mention that this story didn’t happen, but that’s an eternal reference work, and doesn’t count.  Some people accuse DC of engaging in “Hard Continuity,” wherein stories have to be rebooted, recanted, or retold, while Marvel just handwaves at anything they don’t want to deal with, and that’s very true in practice.  But here, we’re looking at a case where a story, however cute, completely undermines the basic Sci-Fi undertones of the whole Flash concept and just plain messes up everything.  For that reason, despite some excellent work from Carmine and Sid, as well as some dialogue cuteness from Gardner Fox, I can’t quite bring myself to give this a high rating.  Still, Flash #167 has never been recanted by an official source, and is thus canonical in a manner of speaking, which pushes it up to a 2.5 out of 5 star rating overall.

Faithful Spoilerite Question Of The Day:  As tempted as I am to make the question “Seriously, WTF?”, I have to ask what OTHER embarassing stories you want to stay in continuity?