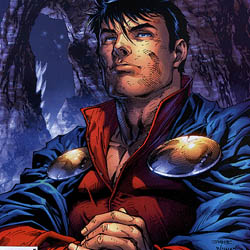 Or – “The Further Adventures Of People Who Look Vaguely Like Characters We Used To Love In The 80’s!” After a so-so launch, the second and third issues of the latest volume of Legion of Super-Heroes left me on the fence regarding whether or not Volume 5 is a success for me.  There have been missteps (far too much focus on Earth-Man, a reliance upon things we’ve seen before) and there have been some workable concepts as well…  It’s kind of been a crapshoot, in all senses of the word, thus far.

This issue finally tips the balance for me, and it does it with a single sentence. Previously, on Legion of Super-Heroes:  In the 31st Century, being a superhero seems to be a lifelong goal for hundreds of teens across the galaxy.  In the wake of a crippling series of unpleasantnesses (a battle with a newly rejuvenated and embiggened Legion of Super-Villains, a conspiracy to undermine the LSH and get them kicked off Planet Earth, and a secret mission in the past that separated the team at critical moments) the LSH is finally rebuilding itself.  This, of course, is the cue for more tragedy, as the children of Garth and Imra Ranzz have been taken by person or persons unknown, the entire moon of Titan has been destroyed in a horrible conflagration, and the team has been forced to take a sociopath into their number in order to continue functioning on Earth.  (Why not just relocate to Mars or something?  Because change is bad.)  Half the team was run through a metaphorical meat grinder by Saturn Queen of the LSV, while Saturn Girl, Lightning Lad and Lightning Lass head off to play cavalry and save their young’ns…

Again With The Great Darkness?

The cover of this issue promises “The Great Darkness RETURNS!,” a statement to which my first response is “Are you THREATENING ME?”  (For full effect, read this line in the full-on Great Cornholio voice.)  This is NOT the sentence which enraged me, by the way.  As we open, the Ranzz Family Revenge Squad has arrived on planet Avalon, not seen since before the original Great Darkness years and years ago.  Combining telepathy and wonder-twin-zappy-kablammicus powers, Lightning Lad, Lightning Lass and Saturn Girl cut a swath through what they discover to be a cult of Darkseid worshippers, who have captured the Ranzz children for nefarious purposes.  Speaking of nefarious, rejected Legionnaire Absorbency Boy meets with some of his old xenophobic acquaintances, who want him to help them kill the Titanian refugees arriving on Earth’s shores.  At the same time, Cosmic Boy gathers an emergency caucus of Legionnaires to address a couple of factors:  First, the reasons why the team’s tracker wasn’t sent along on the tracking mission to find the Ranzz babies (the United Planets ordered her on another mission.)  Secondly, Legion leader elections are due, something that seems wildly out-of-place in the middle of a crisis situation, especially given that team members immediately begin questioning their faith in Cosmic Boy’s current leadership.  It’s old-school Silver Age Legion of Super-Bitches turf here, as Sun Boy pokes at his commander for no real reason other than to remind us that Sun Boy is the team’s dick.

Hey, We Should Totally Have An Election!

Cosmic Boy announces that the team’s members will be voting for the new boss, not counting Blok and the White Witch, who didn’t respond to the team’s summons.  That’s not the part where they lose me, either.  I had given up on Blok being a part of this Legion back during the Adventure Comics backups, where it became clear that they were being shuffled offstage, ostensibly to make room for XS and Gates.  No, the point where I lost my cool was the end of Rokk’s speech:  “And let me remind you all that only ACTIVE Legionnaires can vote, leaving us 26 electors since Matter-Eater Lad resigned yesterday to go back to Bismoll.”

So, after three issues of the Adventures of Earth-Man, after the whole Legion of 3 Worlds thing where old-school members returned to action, after a big launching point where they made the Subs cool, where Bouncing Boy and Duo Damsel got a new groove, where Tenzil was given a pretty high-profile role in the Superman titles again…  You don’t even give him the courtesy of SHOWING his exit?  That’s ridiculous, and it’s unexcusable.  Whether or not you like a character, you have to treat the members of a team with respect or else you torpedo your whole damn concept, and I am absolutely angry at the bait-and-switch of this incarnation of the team.  The Legionnaires Three fight their way to the kids, Earth-Man rebukes his old pals, while Dream Girl drops off the woman who destroyed Titan on her home planet of Naltor.   (I believe this falls under the header of “They’ll at least see it coming, this time.”)  Saturn Girl kills a man, and Shadow Lass seemingly puts the moves on Earth-Man as we fade to black…

The Final Verdict: Don’t Undermine Your Own Premise

Y’know, I get that not everybody loves Matter-Eater Lad.  I see that there is a ludicrous aspect to his powers that can be hard to write for.  I get that the Silver Age Legion is usually mocked as an example of silly overwrought plotting.  That said, this is a team with THIRTY $&@$ING MEMBERS.  There is no reason why they couldn’t keep Tenzil on-staff and just not use him, or at the very least, show some respect for the mise en scene you’re workin with and SHOW US HIS EXIT.  Add to that Saturn Girl murdering a man to protect her cubs, Brainiac 5’s transition from tetchy genius to sonofabitch, and the overuse of the thin plot device that is Earth-Man and I’m not thrilled with the re-un-rebooted LSH.  Legion of Super-Heroes #4 is a bland and superficial tale, with one plot thread that seems ridiculously familiar, another that seems out of place, and generally distasteful group of one-note characters wandering around, earning 1.5 out of 5 stars overall.  Yildiray Cinar’s art is getting better as we go, and his rendition of the team this month makes the best of an unpleasant situation, but there’s just not much here for me to love.

Faithful Spoilerite Question Of The Day:  So, who ARE the 26 active Legionnaires on the current roster?