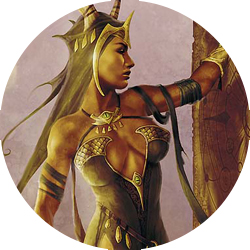 The Dark Sun setting was originally printed in 1991 and, if a somewhat-fringe hobby like tabletop RPGs can be said to have cult classics, then the not-medieval, not-european-ish, not-tolkienesque world of Athas would certainly fit that bill.

Now Wizards of the Coast has revived the oft misunderstood Dark Sun setting. And I have finally managed to get my hands on their first offering, “The Dark Sun Campaign Setting.” And let me tell you, dear reader that I haven’t bored to tears yet, it is full of surprises.

A World of Sand and Silt

Dark Sun focuses on Athas, once a bountiful world, now a sunbleached wasteland. The denizens of this savage world have two options; live in bondage at the heel of the Sorcerer-Kings that rule each city state or try their luck out in the monster-ridden wastes. In this world there are places for Martial and Primal powers, but Psionic power is king, since arcane spellcasters are hunted down, and there are no divinities for clerics and paladins to pray to.

Let me repeat that.

There are no gods in this setting.

This setting means Business. And I, for one, find that glorious. If you listen to Critical Hit! or the Super-Rockin’ MSP, you may have heard me joke about the fact that the Player’s Handbook is a big lovefest, each race and class description devoting a paragraph to reasons why that particular axis gets along with all the others. And also why it makes sense for every race to be able to take any class. Now, don’t get me wrong, that’s partially a good thing, because a lot of people take those descriptions as gospel rather than guidelines, so infusing a flavorful feud between races can cause strife at the table. Dark Sun doesn’t care; there are halflings who eat whatever they kill, including sentient creatures, being a wizard means you need to destroy a little piece of the world each time you cast a spell, and there are no clerics because the gods all packed up their radiant damage and took the first train for the coast. It is a setting that expressly deals with adult themes like slavery and poverty, but does it in its own style, eschewing, for example, the byzantine politics of Eberron, for a savage Kill-or-be-Killed direction. Although some of the themes feel like the setting is yelling “This ain’t your daddy’s D&D!” over and over again, the deliberate departures, both in story elements and rules, promise a drastically different play experience from any other D&D setting.

I got your THEME right here, buddy!

And honestly, it really only bothers me because picking a theme is optional, but gives you a free power, which is a big red light for me in the powercreepometer. Granted, this can be construed as Dark Sun saying “You’re playing in Athas, pick a Theme, gain a power.” But the potential for non-dark sun games to pick this up is always there. Am I going to have to make the choice from here on out (at least until more get printed) of whether my character is an Athasian Minstrel, Dune Trader or Noble Adept? What if no theme fits my character concept? Will I have to walk in with one less power than everyone else? To me themes really smack of the poorly thought out and frequently abused Backgrounds mechanic. But time will tell whether Themes become a vestigial limb of the game or get fleshed (and straightened) out by later supplements.

All and all, despite my concerns The Dark Sun Campaign Setting is phenomenal. I appreciate that much like Eberron was revolutionary in its all-inclusive, kitchen sink approach, Dark Sun is revolutionary in the fact that it picks and chooses the bits of the D&D experience that fit it best and feeds the rest to its ravenous crodlu.

Four Slices of Meatloaf from me, cut with a bone knife due to a staggering shortage of metal.