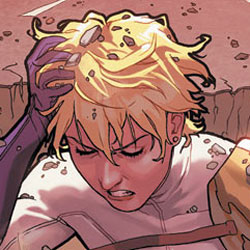 A big purple monster wants to trash New York City. The only thing standing in its way is Power Girl.  Of course she has her own problems she’s trying to deal with as Karen Starr, but that will have to take a backseat for now.  The Major Spoilers duo of Matthew and Stephen return for another Dueling Review as they take on Power Girl #15. Previously in Power Girl: Randall Mikavic attempts to broker an arms deal when the CRASH device goes off, turning him into a giant purple monster bent on destroying New York City. Power Girl just so happens to be on the scene when the destruction starts, but can she bring down the monster while attempting to save her company from being taken away from her?

MATTHEW: Ya know… I  clearly remember somebody declaring that this book was dead to him, deader than disco, deader than Thomas and Martha Wayne?  What happened to washing your hands of the whole thing?

STEPHEN: I’m more than willing to give someone a second chance, but I think my previous proclamation still stands.  What is this issue all about? It’s about Power Girl fighting a big purple monster for four hours.  That’s it.  No real character development except for the final page reveal that one of her Starr Industries co-workers knows she’s Power Girl, and a tie to the whole Justice League: Generation Lost story.  If you like your super hero comic books filled with punching, buildings being crushed, cars being dropped on heads from above, and Power Girl rolling around in the sand with a big purple monster, then here is an issue for you.

STEPHEN: The problem with this issue is it is still missing all the charm and humor that the previous creators brought to the series.  When new creators take over, they usually wipe all the past stories under the table.  Winick does a better job of changing what made this series great by introducing the embezzlement hook that is taking away all the reasons to keep Karen Starr around.  Where is Terra? Where are the cool characters that have assisted before?  They are gone, and they aren’t coming back, and worst of all, this series has been reduced to the same fighty-fighty, woe-is-me superhero book that litter the comic book stands.

MATTHEW: You shouldn’t hold these things in, Stephen, it isn’t healthy to repress your feelings like that.  The embezzlement story bothers me not because it’s undermining the best parts of the first 12 issues (though it is) but because it’s the writing equivalent of “Because I said so!”  We had barely established the backstory and supporting cast when the new writer decided everything we knew was wrong…  There are ways to rework the cast and setting without it being incredibly obvious, and this?  This ain’t it…

STEPHEN: Honestly, if this story wasn’t in a Power Girl book, it would work really well as a JSA story or something that would show up in a Superman Anthology.  The story is fine, but so by the numbers that there is little that makes it anything but a big rumble in the Bronx.

MATTHEW: The story is competent enough, but consider this:  One definition of a successful story is that it couldn’t be told with another character…  Aside from a couple of throwaway lines to remind us that we’re dealing with a girl, this story would work just as well with Mon-El, or Victor, or Supreme, or (perish forbid) The Sentry.  Power Girl needs to be more than just a white-suited squishy Superman if she’s gonna make another year milestone of this title, and I miss Amanda Connor somethin’ FIERCE.

STEPHEN: Don’t get me started on the art.  I can’t tell if C.R.A.S.H. is supposed to be some Wildstorm character out of place, or just a coincidence, but the original character design is really lacking here.  And I continue to dislike the coloring and shading in this book.  The characters are saturated, while the background is toned down.  That can work if you are dealing with a great deal of space behind the character, but when the character is lying on the ground, with her back against the car and this color trick is pulled, it just looks like a bad printing error.

MATTHEW: Crash really is a completely generic super-character, only missing black letters on a white background for the full creamed-corn-from-Aldi effect.  There’s a little bit of fun interplay at the end with Nicholas the super-hacker, but his character reveal during the issue is very deus ex machina for me.  “Oh, no!  I need a hacker!  It’s a good thing that another of the characters in the book secretly is one, perhaps!”  Next issue, Kara’s secretary will be a ninja and her lawyer will secretly be the head of SHIELD.

STEPHEN: I gave the series another chance, I really did. The first part of the story had an interesting hook, but when this issue opens with an obvious error in the villains background, that shows someone doesn’t really care as much about this series as he believes he does.  It doesn’t work, and I’m still sticking with my previous assertion that this is a series to be skipped.  So long, Power Girl! It was fun while it lasted.

BOTTOM LINE: WHAT HE SAID

MATTHEW: There’s a bit of a fun double-entendre in Power Girl going 12 rounds with a fleshy, purple-headed monster, but other than that, there’s not much going on here.  The new art is the polar opposite of Amanda Connor’s clean style, and while it’s not unattractive, it’s saddled with a weird pastel color palette that makes the whole thing feel like I’ve wandered into the girl’s toy aisle, with everything in muted shades of pink and purple.  I had just managed to find emotional investment in Power Girl’s status quo after the first year of the book, and her little software company had barely gotten off the ground before Winick dismantled it, robbing us of both a good mise en scene and a satisfying climax.

More damning are the overt ties to Brightest Day, one of the first line-wide events that is neither, and pretty much threatens to suck all the fun out of everything.  When the most successul moments of the book are in the one-page origin of the cardboard cutout villain of the week, there’s a pretty good size problem with the title.  Powerl Girl #15 earns a disappointed 1 out of 5 stars overall from me.

Faithful Spoilerite Question Of The Day: Other than, “Because I, Judd Winick, wanted to,” can anyone think of a really compelling reason to come in and ravage a quirky and successful title in this manner?  Is it really all about the corporate branded crossover synergy?