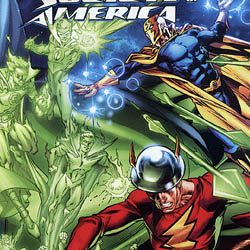 Or – “The Problem With A JLA/JSA Crossover…” Back in the day, the JLA had their own book, and travelled to Earth-2 (or to somewhere else WITH natives of Earth-2) once a year, usually a two or three part affair.  The JSA seldom had their own title during this period, mind you, and usually we saw a sampling of each team rather than THREE DOZEN heroes.  With the JSA, the JSA All-Stars, and the Justice League in play, as well as guest-stars galore, there’ a lot going on in this crossover, but not a lot of focus… Previously, on Justice Society of America:  The Starheart was created by the Guardian of the Universe, eons ago, the crystallized agglomeration of the magic they rejected (along with their emotions, their women, and the majority of their hair.)  Crashing to Earth years ago, it became the source of the powers of Alan Scott, the original Green Lantern.  In the wake of the Blackest Night, Alan’s daughter, Jade (wielder of the Starheart powers herself) crashed to Earth in a green meteor, after which magical types kind of went nuts all around the world.  The Justice Society (as well as the JSA All-Stars) has come together with the JLA (a team in flux right now) to try and stop the power, but find themselves stymied by the fact that their own members (Alan and his son, Obsidian) are the faces of the invasion.  Worst of all, even their own powers fail them, and three of their number have been captured by Alan Scott, and face the spectre of execution…

So, we’ve got three dozen heroes in action, but this issue begins with the appearance of ANOTHER, in the form of Kyle Rayner (Green Lantern honor guard member and former Starheart wielder himself) who confronts his ex-girlfriend Jade about her father’s actions.  Before anyone can respond to this latest reveal, Obsidian (Jade’s brother) swoops in and possesses her, causing the twosome to merge into one light/dark hermaphroditic being.  Jadesidian lays the smack down on the teams, attacking Kyle specifically with rage.  Elsewhere, on the moon, Starman (Mikaal Tomas) is dragged out of the line of fire by Doctor Mid-Nite, who sets out to return Mikaal’s power gem to him.  Former Outsider Sebastian Faust, Flash Jay Garrick and Wildcat confront Alan Scott, only to discover that “Alan” isn’t Alan at all, but the embodiment of the Starheart itself!  Supergirl and Power Girl are fighting the real Alan Scott (in his awful Kingdom Come armor) when Mr. Terrific calls them back in.

The first half of the issue has been a high-speed game of “Hey, it’s that guy!” like counting sheep through the windshield of a speeding car…  Mark Bagley makes it interesting as the JLA/JSA/All-Star hybrid team fights green-energy based duplicates of the ORIGINAL JSA members (which causes the problem of adding more costumes to the mix) while Kyle Rayner accosts his ex for cheating on him.  While Donna Troy deals with that revelation (making me think that they’re going to put Kyle back on the team, or at least bring the Kyle/Donna couple back together) Doctor Fate blasts the crap out of Objadeian, but before they can take him/her completely out of the picture, armored Alan arrives for more fighty-fighty.  It’s setting the stage for next issue’s final battle, which honestly makes me really happy, because this story is going on FOREVER…

So, the long and short of it breaks down to the problems of putting this many characters in a crossover like this, only to add MORE people.  I literally cannot even COUNT the number of heroes that appear in these pages, with everyone from Stargirl to Congorilla putting in an appearance, reminding me of an old-school X-Men crossover.  At least the key action involves Flash and Wildcat, actual JSA members, but there’s not a whole lot of coherence to be had here.  Most egregiously, this issue comes right after Bill Willingham’s exuberant exposition by Obsidian that he’ll never let himself by controlled again.  Sigh…  Mark Bagley’s art is finally seeming to fit into the overall DC Universe after some shaky issues here and there, and there is the tantalizing possibility of Faust joining the JSA or JLA after the crossover, but mostly it’s all sturm, without even the requisite drang to balance it all out.  James Robinson throws everything but the kitchen sink into this one, causing Justice Society of America #42 to earn a disappointed 1 out of 5 stars overall.  No matter how well drawn it is, I doubt that we’ll remember this in six months…

Faithful Spoilerite Question Of The Day:  Can anybody run down the entire character count for this one?  Anyone?  Anyone?  Bueller?