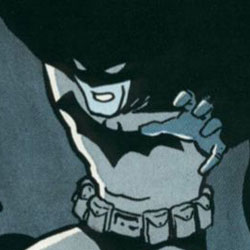 This week on the show; Batman: Year One, Ultimate Spider-Man gets animated, Cthulhu strikes, Irredeemable gets reviewed, and Wolfman vs. Wolfman.

Stephen
THE CALLING: CTHULHU CHRONICLES #2 Written by Johanna Stokes, Michael Alan Nelson Drawn by Christopher Possenti
The Lovecraft-inspired event of the year continues! Darkness is rising and soon all will hear…THE CALLING! Clayton Diggs tinkers on the brink of madness as he struggles to identify the first piece in this bizarre, paralyzing puzzle — all before a great one awakes and the world changes…forever! An all-new ongoing supernatural horror series with a decidedly modern spin from superstar writing team Michael Alan Nelson (28 DAYS LATER, HEXED) and Johanna Stokes (DEATH VALLEY, STATION)!

Rodrigo
Prince of Persia #2 Written by JORDAN MECHNER Art by TOM FOWLER, DAVID LOPEZ, BERNARD CHANG, TOMMY LEE EDWARDS, CAMERON STEWART, NIKO HENRICHON, PETE PANTAZIS,  & DAVE STEWART Five very different people are about to be put to death for a crime they didn’t commit. Well, one of them may have done it. But the only way they can escape the hangman’s noose is to find the common thread that ties them together. The one man they have all encountered, and who changed their lives – Dastan, the prince of Persia!

The Paradigm are still reeling from their no-holds-barred battle with the Plutonian. Alliances are forged and broken, and one hero is revealed to have powers beyond the team’s wildest dreams. But they may not be enough to prevent the ghastly event that’s on the horizon… This is the perfect time to pick up Mark Waid’s explosive, Eisner-nominated superhero series!

Yes, we are dragging this out longer than we should, but who emerges victorious in this week’s Wolfman battle?

The story recounts the beginning of Bruce Wayne’s career as Batman and Jim Gordon’s with the Gotham City Police Department. Bruce Wayne returns home from training abroad in martial arts, manhunting, and science for the past 12 years, and James Gordon moves to Gotham with his wife, Barbara, after a transfer from Chicago. Both are swiftly acquainted with the corruption and violence of Gotham City, with Gordon witnessing his partner Detective Flass assaulting a teen for fun.