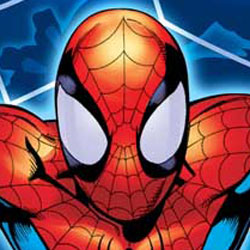 Steering Ultimate Spider-Man as the Creative Consultant, Dini will also write the series pilot; as Supervising Producers, Man of Action Studios will direct the writing staff, generate scripts and story edit; and Bendis, the man who reinvented Spider-Man for a new generation, will oversee the series as Consulting Producer.

“When we first sat down to discuss Ultimate Spider-Man, we put together a wish list of the most exciting talent working in animation who would bring the best voice and creative direction to the show – and I’m proud to say we got them all,” said Jeph Loeb. “We want Ultimate Spider-Man to be a showcase for Marvel Animation and Spider-Man is the perfect character to give fans just what they want.”

Working in the Marvel Universe for the first time, Dini explained, “As a lifelong fan of the Marvel Universe, I’m excited to tackle these characters in such a bold new series. Ultimate Spider-Man will bring fans a new take on their favorite friendly neighborhood hero- and some surprise cast members– while staying true to what’s always made Spidey so popular. We’ve got a superb creative team assembled with amazing stories to tell and I can’t wait for fans to see what we’ve cooked up.”

Bendis echoed those sentiments, exclaiming, “It’s Ultimate Spider-Man, the animated series-and it happened in my lifetime! That’s just so cool. I couldn’t be more excited to be a part of this and here’s to Jeph Loeb for putting it all together!”

Equally thrilled to join Ultimate Spider-Man,” the Man of Action team explained, “We’re looking forward to having a lot of fun working on Spider-Man. They’ve brought us in to help provide a unique vision for the show while remaining absolutely true to the character, so that’s exactly what we’ll be doing. Should be a great ride!”

Cort Lane, Vice-President of Animation Production & Development added, “From The Super Hero Squad Show to the upcoming Avengers: Earth’s Mightiest Heroes, Marvel Animation is focused on making the best super hero shows for fans of all ages. Now, with this tremendous talent signed for Ultimate Spider-Man, we’re about to give fans super-powered animation like they’ve never seen before.”

For more news on Ultimate Spider-Man and all the exciting projects from Marvel Television, stay tuned to www.marvel.com