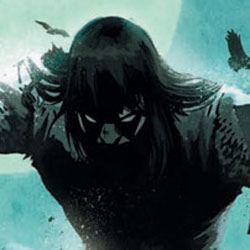 The Lovecraft-inspired event of the year continues! Darkness is rising and soon all will hear…THE CALLING! Clayton Diggs tinkers on the brink of madness as he struggles to identify the first piece in this bizarre, paralyzing puzzle — all before a great one awakes and the world changes…forever! An all-new ongoing supernatural horror series with a decidedly modern spin from superstar writing team Michael Alan Nelson (28 DAYS LATER, HEXED) and Johanna Stokes (DEATH VALLEY, STATION)!

The prelude to THEWAR FOR THE UNCHARTED TERRITORIES continues! The Kkore. They have invaded the Uncharted Territories with weaponry unlike anything seen before. Now, they have just put Scorpius in charge of an armada! This is the next step for the world of FARSCAPE from show creator Rockne S. O’Bannon!

The savage adventure continues in this third issue of Robert E. Howard’s epic! The bloodthirsty Cormac FitzGeoffrey will stop at nothing on his path toward revenge. When that path leads him on the trail of a kidnapped woman, will he be too late to save her life…and can he survive the attempt? Featuring a cover by fan-favorite THE SAVAGE SWORD OF CONAN artist Joe Jusko!

The DuckTales just keep on coming as Uncle Scrooge, Launchpad and the whole gang from Duckburg star in “Like a Hurricane Pt. 3: The Curse of Flabbergé.” Once again, our heroes find themselves deep in the heart of a tropical forest in search of a jewel that time forgot; but will they be able to solve the mystery, and rewrite history when the curse of the jewel suddenly strikes? Find out this month from BOOM Kids! and the Disney Afternoon Revolution!

When one of Uncle Scrooge’s rivals, John D. Rockerduck, challenges Donald Duck’s favorite uncle to a penny-pinching contest that spans the globe, he says ‘Bring it on!’ Hop in your hot air balloon with BOOM Kids! and follow Scrooge and the gang as they trial blaze on a budget in this epic of economy, UNCLE $CROOGE: AROUND THE WORLD IN 80 BUCKS!