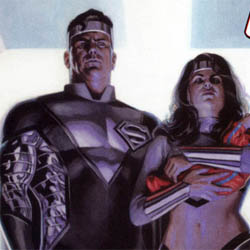 Or – “Why Wouldn’t Jor-El Make ONE Big Ship Instead Of Four Small Ones?” If Jor-El of Krypton had been quicker in his experiments, or perhaps more assertive in his arguments, we might have an entire planet of Supermen running rampant across the universe.  Had he built one big rocket instead of several small ones, though, he could have saved his own life and that of his wife as well as baby Kal’s.  Of course, that course of action might also have a few consequences as well… Previously, on Superman – The Last Family of Krypton:  Many years ago, on a planet called Krypton, a man named Jor-El became aware that forces within the planet’s core threatened to destroy the entire world, killing every one of Krypton’s inhabitants.  His beliefs were laughed off by the Science Council, and Jor shifted his focus from saving the planet to finding ways to evacuate his people.  He fired a test rocket with a monkey in it, then sent his son’s beloved pet dog into outer space as well.  As the tectonic forces grew more unstable (or, alternately, as an intergalactic pirate named Black Zero took out a hit on the planet Krypton, depending on your personal continuity) Jor realized that he could only save his son, his beloved Kal-El, who was rocketed to Earth as Krypton exploded.  Raised by an Earth couple, Kal tied a beach towel around his neck and became a full-fledged force for good.  This is the story of how none of that happened…

We open with Jor dreaming of the rocket, of Kal-El’s flight from Krypton to sanctuary on Earth, holding his beloved wife as the planet explodes around them…  As he watches, his son’s rocket escapes orbit, only to take a hit from space debris and explode!  He screams out in denial, crying “NO!” as he suddenly awakens from a nightmare.  Jor and Lara discuss his survivor’s guilt, and even walk to the window of their home looking out over the skies of… Metropolis?  Heh.  Got me with that one.  Flashing back a few weeks, we see the arrival of a Kryptonian ship on Earth, as Jor-El and Lara use their super-abilities to save various innocents caught in their ship’s wake, and stop a military helicopter from crashing.  No year is given, but the Els quickly stop disasters that are eerily reminiscent of various late 70’s cataclysms on our world (Mount St. Helens, Three-Mile Island, Skylab and more) and an appearance by Walter Cronkite gives us a rough idea that this is happening about the time of the Superman movie opening or thereabouts.  Jor then creates a home for them using Kryptonian technology, and quickly forms his own scientific corporation, JorCorp, to Lara’s consternation.  I am troubled by the fact that the “S-shield symbol is the crest of the House of El” schtick from the movie has become canonical to the comic book incarnation of the hero.  I don’t know why this bothers me, but it does, pulling me out of my enjoyment of the issue for a few panels as Jor-El does very Superman-like hero stunts.

The fame of the House of El on Earth spreads until young Kal can’t even so much as play without being surrounded by paparazzi and fans, so Lara comes up with an alternate method of raising the boy:  send him undercover with a couple from Kansas and raise him there.  This development annoys me, as nearly every Elseworlds/What If story comes to the point where we, the readers, realize that everything would have been better in the “regular” version of the tale.  Moving little “Clark” in with the Kents feels like they’re doing that bit again.  Lara becomes a star with her “Raology” self-help texts, while JorCorp becomes more and more pervasive in the culture.  Kal-El loves living with the Kents, but more and more his real father seems to disapprove of his life and his methods.  When a brilliant young boy from Smallville is given an internship at JorCorp, Kal thanks that his father is more like his former classmate than he is like Kal.  (And if you didn’t realize that the brilliant boy’s name is Lex Luthor, you probably haven’t read enough Elseworlds stories yet.)  Renato Arlem’s art reminds me of a more abstract Howard Chaykin in this issue, and nowhere is that more apparent than the scenes where the Jor and Lara have a fight, then makeup in the heart of the sun, leading to her getting pregnant.  (This issue covers nearly a decade of time with skips here and there.  It’s actually pretty deft in the time-jumping, though.)  Lara’s due date comes at the Kent farm, and she gives birth to twins with the help of the Kryptonian birthing matrix, leading Jor-El to finally accept John and Marth Kent as surrogate family…

The premise of this series is a pretty neat one, a story that we haven’t seen done to death (not mentioning any names, but “Bruce Wayne becomes Batman in X Time Period” has gotten pretty shopworn.)  Cary Bates is a name that recent readers may not recognize, but he has an extended history with the Man of Steel, and his take on Kryptonian super-science is pretty ingenious.  Jor-El is a fun central character, reminiscent of certain appearances of Brainiac 5, and his unhappiness at the path taken by his wife and son makes for what I can only assume will be the basic conflict of the two issues to come.  All the players are in motion here, the Daily Planet, Lana Lang, and all the usual toys are in the sand, and it’s shaping up to be an interesting miniseries.  I wonder if this wasn’t originally put together as a SIX issue stretch, as this extra-long book reads like two books in one, but the art is well-done throughout, giving us 70’s era vehicles that look like 70’s era vehicles, and the coloring and effects do well in showing Kryptonian science in action.  All in all, this is a fun issue, marred only by a butt-ugly cover (Alex Ross apparently uses the same actors for all his works, as Jor-El and Lara are clearly based on the same faces he uses for Superman and Wonder Woman in every other thing he draws) that bears no resemblance to the interiors and an overuse of the Kryptonian typeface in word balloons.  Bates brings his old-school chops to this project without feeling at all dated, and Superman – The Last Family of Krypton #1 earns an impressive 4 out of 5 stars overall from me.

Faithful Spoilerite Question Of The Day:  All the promotional material for this series used the Ross cover image, leaving me completely NOT interested until I thumbed through this issue first-hand.  Can a bad cover ruin a good comic for you, or am I just overly sensitive?