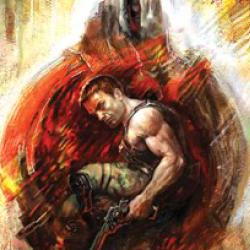 A ‘Radical Premier’ seems to be another (and perhaps preferable) phrase for a #0 issue, and this one certainly has a lot going on: aliens, wars, and a crazy Reverend. Find out more after the jump! The issue opens with a group of humans involved in a battle with aliens. The humans retreat but their Captain is blasted whilst trying to help a wounded soldier, but later on he is discovered by a primitive tribe nursed back to health. He falls in love with one of the women but, as they are getting married, the aliens return, slaughtering the tribe and capturing him. It is then revealed that humanity is part-allied-with/part-conquered-by an alien race called the Drac and the Captain was part of some sort of resistance movement, which has now been defeated. We then cut to the Captain at a camp for ‘reeducation’, which is conducted by the ‘Reverend’ Krebs who shouts at the prisoners about the non-existence of God and, when a man declares himself a believer, the Reverend has him fight to the death against an enormous man named Darwin. The issue ends with Darwin beating the believing man to death.

As a #0 issue, the point of this book is to give us an introduction to the world and characters of The Rising, and to introduce the main plot elements. In this it is successful: the Drac are obviously up to no good, and we’ve got our hero who’s fighting against them. There are also a few other interesting plot elements, in that the Captain’s brother works with the Drac and it is stated that Drac stopped wars and cured ‘the virus’ (which also sounds important), suggesting that perhaps they’ve done some good on Earth, a plot thread I hope is picked up to prevent the Drac from being nothing more than run of the mill villains. Overall, the plot certainly has a familiar air to it, but it is only an introduction and a few extra elements make it a bit more fresh. A quick comment, as well, as to the Captain; or, rather, as to his name. Looking at this book’s description Radical’s website, his name appears to be Jarrett Jakes, but this is never mentioned in the book itself. I would think that, in an issue that is meant to be an introduction to a series, it would be prudent to inform us of the main character’s name (well, we do learn his last name because we learn his brother’s name, but the point still stands).

The dialogue is certainly a mixed bag: sometimes it’s fine and at others it can feel rather stilted. Specifically, some lines in the opening battle and then at the prison camp really don’t feel natural. Something to be praised, however, is that this book uses its dialogue very sparingly; for example, the whole sequence where the Captain is healed by the tribe and falls in love with one of the women does not contain a single word, and the entire first half of the book has a minimum of speech. Instead, the creators have opted to let the art do the work, and I really enjoy it when the old adage, ‘Show, don’t tell,’ is taken to heart like this.

THE ART IS FANTASTIC

What’s more, the creators were very wise to let the art do the work because the art is, quite simply, fantastic. The book is drawn in a realistic style that I think would be difficult not to enjoy. The story throughout the first half of the book is portrayed effortlessly, in a manner that makes words look like crude tools for the job by comparison. The opening battle looks and feels tense, whilst the section with the tribe starts off with a bright tone, but each page looks darker as the sequence reaches its bloody conclusion.

The art continues to be of high quality during the more word-heavy second half, although there are some odd panels during a sequence where Jarrett’s brother talks to a Drac ‘Consul’: the perspective is not entirely clear, and hence it becomes difficult to tell where the two characters are in relation to each other. Apart from that, though, the art is next to flawless and was a huge factor in getting me interested in this book right from the beginning.

A word, though, about the release schedule for the main series. The #1 issue is advertised as being set for release in ‘Winter 2011’, which I first thought meant all the way in December next year, but could be January or February. Still, whether six or eighteen months away, either is a long time for a series to launch after its #0 issue and I really have to question how many people will remember this book when it the main series launches. Seeing as a #0 is meant to be an introduction to a series, this gap between issues becomes a major concern.

The cover and interior artists are one and the same, and so the cover is sporting more of that great art (correction: apparently the cover is by a different person). It features a group of Drac looking out of some sort of window (possible on a ship?), whilst Jakes crouches below, gun in hand. So, the cover sums up the events of the book quite nicely, and certainly gives us a suggestion of the relationship between humanity and the Drac: the latter in their high-tech ship, whilst the former has nothing but a simple handgun. I enjoy covers that have some thought in them, and covers that look nice – this book has both. The title is also in a nice central position, which I find in this case to be more aesthetically pleasing than the usual top-centre location.

This book has a fair story and amazing art, and so is worth picking up for the latter alone. What’s more, it is only $1.00, which is an absolute bargain. Even though the main series may be a while away, this is something that I can definitely recommend, and as such it earns four stars out of five.

*Sorry for the lack of information as to the creative team, but there was little to be found