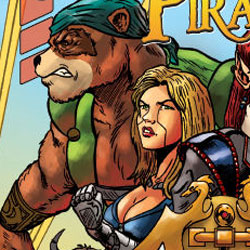 If you’ve already flipped through this month’s Previews, you may have seen the solicitation for Sky Pirates of Valendor: Volume 1.

Sky Pirates of Valendor recounts the debut adventure of Pirate Captain Tobin Manheim and the rest of the crew of the Rogue’s Revenge. Set in the fantasy world of Valendor where giant continents float on oceans of sky! A mix of steampunk and high fantasy where magic co-exists with futuristic technology, Valendor is a fully realized world, with complex social structures, a guild-driven economic system, and a host of political intrigue.

Creator Everett Soares and others involved in the creation of the book are going on a signing tour.  We have the where an when, after the jump.

About Free Lunch Comics
Free Lunch Comics has been publishing since 1998 and features several titles in addition to Sky Pirates, including: Bigger, Only in Whispers, Pork ‘N Beans, Beyond the Kuiper Belt, The Original Nutty Funsters, Cookie Bear and the Good Girl Art of Norman Katz.