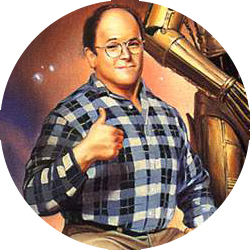 Opinion: Twilight of the Schmucks

For almost two decades the Schmuck has been the undisputed king of comedy. There’s just something about a guy (or girl, a Shmuckette, if you will) who doesn’t have it together that just makes people laugh and laugh. Or at least it did. Now it seems the winds of comedy are a-changin’ and it doesn’t look good for the schmuck.

And now a few quick disclaimers. First off I’m mostly going to be talking about TV and Movies, and more specifically about comedy in this article, so if you clicked over to hear me make fun of Arsenal I apologize, and won’t mind if you board the next hyperlink out of here. Secondly, I’m not Jewish, nor can I speak Yiddish, but I will be using the word ‘schmuck’ a lot, primarily because it covers the breadth of lameness that these character’s exhibit. Who are these characters, you ask? Read on.

A Schmuck by Any Other Name…

So which characters are schmucks, and why use that word to define them? The characters I refer to are largely defined by their social ineffectiveness and inability to ‘seal the deal’, whether at work, inter-personally or sexually. They’re just smart enough to get their self-serving schemes underway, so they can’t be universally called “idiots,” They often have a lukewarm moral compass, and are too neurotic to follow it until the very breaking point. They are gullible, submissive and socially awkward. In short, the sort of person who, after an extended interaction would leave you saying, “Wow, that guy was a total schmuck.” Most importantly the character is not necessarily defined by his motivation, but rather, by his inability to achieve it.

By now I’m sure you have a few ideas of some popular characters who fit into this category. But just in case you don’t, here are a few examples: George Costanza from Seinfeld is probably both the prototype and apex of the Modern Schmuck, being so intensely ineffectual in society and lacking any redeeming quality except for his amazing ability to generate schadenfreude. Homer Simpson is another classic example taking Gleason’s Ralph Kramden to the next level, a bigger, faster, dumber schmuck. Also any character Will Ferrell has ever played in a movie is probably a schmuck.

So why are there so many fictional schmucks? Two reasons. One good, one bad. The good reason is that the schmuck is easy to relate to, we all have days (or decades) in which we feel like total losers, so seeing a character being kept down by circumstance, society or even personal foibles is somewhat satisfying. The bad reason is that it is too easy to write such a character, the schmuck is now a stock character, like the sassy gay best friend, mean cheerleader and quiet, second act loner badass with a dark past. It is much more difficult to write a character with strengths and weaknesses than it is to write a character with nothing but weaknesses. For example; go back and watch the very first episode of the very first season of Scrubs, then watch the first episode of the third season of scrubs. J.D. Goes from a clever, though slightly insecure young doctor to a, well… you know. This actually happens in a lot of sitcoms. As the seasons wear on the lead characters become progressively stupider caricatures of themselves, a process I have dubbed, you guessed it, Schmuckiffication.

I believe the prime reason for the prevalence of schmucks and the slow schmuckiffication of the sitcom character comes from the people writing them, Generation X. Now, I’m not saying that Gen Xers are schmucks, I’m saying that for a long time everyone told them they were. This ennui has manifested in the strange phenomenon of the Leading Schmuck. A protagonist who, like them, is a perpetual underdog. A trope that is defined by how awkward it is around other tropes, and one that ironically enough has now become the dominant force in comedy. In fact, the schmuck is so engrained that now we have action schmucks, horror schmucks and even schmuckumentaries. People now take these self-stifling characters for granted, assuming that in order to be a hero, first you have to be an antisocial nerd, romantic spaz, or maladjusted slacker. However it will not be like this for long.

It’s mostly just hints and echoes, partially remembered wisdom from ages past and brief glimpses of the future. But the signs foretell the end of the era of the schmuck. Take a look at some of the more successful sitcoms out right now. How I Met your Mother features a protagonist who sometimes over-thinks things to his own detriment, yet is still a successful architect, and hangs out with awesome friends. The Big Bang theory features a bunch of antisocial nerds, however, they are extremely intelligent and successful within their own fields, even Scott Pilgrim, who is pretty damn schmucky is quickly revealed to be a rock n’ roll kung-fu master… why, it’s almost like these schmucks aren’t schmucks at all! Indeed if you want to look at the forerunner of this brave new world just look at the tragically short-lived, yet hysterically funny Better off Ted. A sitcom about a successful single dad executive? with morals? And a drive to succeed? Madness! Mark my words, the schmuck has had his day, even the aforementioned generation that most identifies with them is tired of their schmucking around. The time of sensitive, capable and imaginative young protagonists is at hand! Don’t worry though, there will still be work for the Will Ferrells and Steve Carells, I mean, the best way to make someone look good, is to put him next to a schmuck.