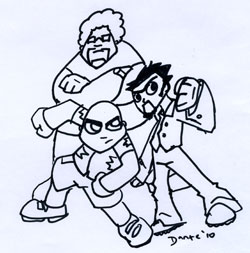 There was a convention, or something… SCOTT PILGRIM! BATMAN! PEN TO THE EYE! and the usual dose of goofy that you expect from the Major Spoilers Crew. Remember kids, we have “a Matthew”.

Entering into the ring this week is one Scott Howard, awkward teen until the light of the silvery moon unleashes his genetic code turning him into TEEN WOLF.  Also entering the ring is one Jacob Black, who… uh… crappit, never seen the movies, have not interest in it, but he is TWILIGHT WOLF!
VOTE

MAJOR SPOILERS DISCUSSION: Scott Pilgrim’s Finest Hour (Volume 6)
It’s finally here! Six years and almost 1000 pages have all led to this epic finale! With six of Ramona’s seven evil exes dispatched, it should be time for Scott Pilgrim to face Gideon Graves, the biggest and baddest of her former beaus. But didn’t Ramona take off at the end of Book 5? Shouldn’t that let Scott off the hook? Maybe it should, maybe it shouldn’t, but one thing is for certain all of this has been building to Scott Pilgrim’s Finest Hour! The sixth and final volume to indie comics most influential series in the last decade!