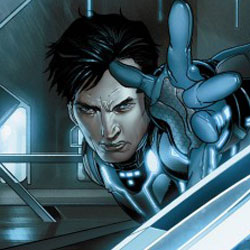 As mentioned in our San Diego Comic Con coverage, Marvel will release TRON: Betrayal in October.  The two-issue mini-series is a direct lead in to the TRON: Legacy movie arriving in stores in December.

The storytelling picks up in the aftermath of Walt Disney Pictures’ first film in its franchise TRON.  Kevin Flynn is now in charge of Encom, the world’s largest video game company.  Kevin, a break-through game developer, has built the Grid, a digital world filled with living programs.  This new virtual world is about to develop a life of its own and, in order to control it, Flynn’s going to need to help of an old friend…named Tron.

Seems like there are some advantages to having your publishing company purchased by Disney.