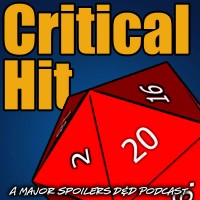 This episode: You asked for it, and we’re delivering – a series of episodes walking those who want to become a Game Master through the process. This time out: The Hook, the Story, and the Characters.