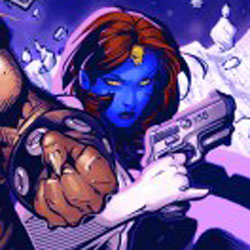 In this issue: Rodrigo returns, Avatar gets bent, and the X-Men meet their match?

Ed Norton will not be in Avengers Movie
LINKAGE

REVIEWS
Stephen
ROBERT E. HOWARD’S HAWKS OF OUTREMER #2 Written by Robert E. Howard, Michael Alan Nelson Drawn by Damian Couceiro Savage warrior Cormac FitzGeoffrey has discovered who murdered the knight he considered a brother – and he will not rest until his thirst for revenge is quenched!

Matthew
The Boys #44 By: Garth Ennis, Darick Robertson As the greatest religious festival on the superhero calendar gets under way in New York, the Homelander finds himself front and centre, very much against his will. But so does Annie, whose heightened public profile leads her to get something terrible off her chest. Meanwhile, Butcher ponders what to do about ‘the Hughie situation’, and MM makes his own feelings known… just when everything was going so well…

MAJOR SPOILERS POLL OF THE WEEK
When a hero falls, one would hope that they are able to go to a better place, but sometimes, just sometimes, they come back as a ghost to haunt our lives and make us miserable.  If ghosts could be tangible enough to fight each other, and could die once again, who would win in The Major Spoilers Spooktacular Poll of the Week?
VOTE

MAJOR SPOILERS DISCUSSION:X-Men Supernovas
As old threats are still having their effects, new, more deadly threats emerge from the unlikeliest of places. Threats that spell doom for the X-Men. Plus: What could possibly strike terror into the heart of…Sabretooth?! And who are the Children of the Vault? Mike Carey (Ultimate Fantastic Four) and Chris Bachalo (Uncanny X-Men) take over X-Men, or at least what’s left of them! Collects X-Men #188-199, Annual.