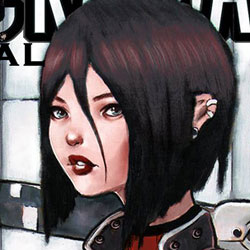 When Hack/Slash Annual 2010: Murder Messiah arrives, it will serve as the bridge between the Cassie Hack stories from Devil’s Due Publishing  and the current series at Image Comics.

“When we started off at Image, I wanted to give everyone a fresh starting point,” says series creator Tim Seeley. “So, we did Hack/Slash: My First Maniac. But my intent was always to continue with the further adventures of Cassie and Vlad, and this annual will set up a great new status quo for the ongoing series!”

Cassie’s biggest “fan” — a serial killer — is on a spree, cleaning up her loose ends. That means no foe or friend is safe. Meanwhile, 14 years in the future, in an America ruled by the Black Lamp Society, street-witch Liberty Lochs is on a desperate quest to find Six Sixx’s guitar…