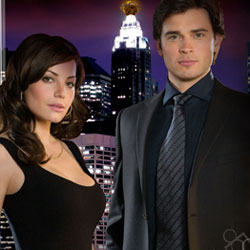 Even though Smallville is ending at the end of the tenth season, you can still have fun with Clark, Chloe, Lana, Lex, and the rest with the Smallville role playing game from Margaret Weis Productions.

Every hero has a beginning… The SMALLVILLE Roleplaying Game lets you experience all the superpowered action and coming-of-age drama of the hit show on the CW Network. Whether you’re struggling against your heritage, your humanity, or your heroic responsibility, you’ll need the support of friends and family in order to embrace your destiny. Players may choose to take on the role of Clark, Chloe, Lois, Oliver, or their own original characters in the world of SMALLVILLE.

The game uses the Cortex Gaming System that develops the core gaming rules, while the Smallville module sets up the environment and characters.