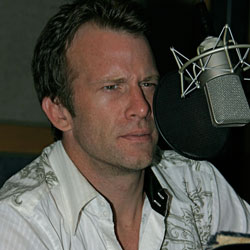 If at first you don’t succeed, take the animated role.

Therein lies the lesson of Thomas Jane’s quest to play the role of comic book anti-hero Jonah Hex. The star of HBO’s popular series Hung once lobbied to play the theatrical role of Jonah Hex and, though he fell short in that attempt, Jane has found another path to the character as the disfigured cowboy’s voice in the DC Showcase Original Short, Jonah Hex. The all-new, animated Jonah Hex appears as a companion piece on the upcoming Special Edition Blu-Ray and 2-Disc Special Edition DVD release of Batman: Under the Red Hood, the latest entry in the ongoing series of DC Universe Animated Original PG-13 Movies coming from Warner Home Video on July 27, 2010.

In the short, the tough-as-nails bounty hunter always gets his man – until someone else gets to him first. In this case it’s a murderous madam who wants to steal more than just bounty from Jonah Hex. The animated short Jonah Hex is based on a story from the award-winning comic series, and scripted by renowned author Joe Lansdale. Jane leads a voice cast that includes Linda Hamilton (The Terminator), Michelle Trachtenberg (Mercy, Buffy the Vampire Slayer), Michael Rooker (Days of Thunder) and Jason Marsden (Spirited Away).

A lover of both comic books and westerns, Jane felt a certain kinship to the character – and the result is clearly evident in his vocal depiction of Hex and the emotional range of the performance. Jane was the ultimate perfectionist throughout the recording process, never settling for good takes when great was attainable. From the original recording session through follow-up ADR, the give-and-take between Jane and the filmmakers – including executive producer Bruce Timm – was quite collaborative in achieving the final presentation.

Jane currently headlines HBO’s Hung, though he’s active in numerous other projects, including films being developed by his own production company, Raw Studios. Coincidentally, Jane founded Raw Studios with Timothy Bradstreet and Steve Niles, the screenwriter of the first DC Showcase short, The Spectre. Jane’s directorial debut, Raw Studios’ Dark Country, continues to play to rave reviews and enthusiastic crowds at conventions and festivals around the world.

No stranger to the fanboy/comics realm, Jane co-wrote his own comic book miniseries, Bad Planet. He played the title character in the 2004 version of The Punisher, starred in Mutant Chronicles, and had roles in both The Crow: City of Angels and Buffy the Vampire Slayer. He has drawn widespread acclaim for many of his non-fanboy roles, especially his turn as Mickey Mantle in the HBO film, 61*. His numerous credits run the gamut from Magnolia, Deep Blue Sea and The Thin Red Line to Boogie Nights and Face/Off.

After shooting all morning on the set of Hung, Jane came into the recording studio to put some final touches on his Jonah Hex performance – and to chat about his attraction to anti-heroes, his adoration of comics, and how he came to (literally) rub elbows with Ringo Starr. This is what Thomas Jane says …

QUESTION: This isn’t your first run at the role of Jonah Hex, is it?

THOMAS JANE: I’ve been a fan of the comic and the character and that whole western world. I’m glad to be voicing the role, and I actually wanted to do the live-action film. When they were casting the movie, I had a guy come and do my makeup, we took some photos and sent them off to Akiva Goldman. I know some of those photos have leaked out online. They had a different director at the time, and Josh Brolin had just hit with the Coen brothers movie, so he had pick of the litter. And that spelled outski for me. QUESTION: Did you do any research to voice the role?

THOMAS JANE: Well, I lived with a pack of wolves for a week up in the ponderosa foothills to perfect my growl (he laughs). No, mostly I just tried not to love my voice. I tried my best.

QUESTION: Any thoughts on the look of Jonah Hex?

THOMAS JANE: The animators did a great job in capturing the ugliness of the character. He’s not a pretty boy. He looks like he’s been butchered by a blind barber. He’s mean as hell, and I can’t imagine anybody wanting to make love to the dude. He must be awful lonely. And that just makes him meaner. He’s a true anti-hero, and I really love that kind of character. Hollywood doesn’t do the anti-hero justice very often – it’s a tough character type for the studios to understand. The closest you get these days is like (Michael) Chiklis on The Shield. Taxi Driver may have been the last great anti-hero film. There’s always good ones in video games, especially games like Grand Theft Auto. Actors and directors lover anti-heroes. Unfortunately, it doesn’t seem to be the case with the rest of America right now. QUESTION: Now that you’re directing, has that perspective effected your performances?

THOMAS JANE: I’m a lot nicer to the guy directing than I used to be. I’m also a little more pragmatic. I understand the needs of the story on the whole, and I’m less myopic in my view of the role as an actor. I’m serving a machine, the story as a whole, so the mechanics of me trying to strike an emotional truth are counter-balanced by not gurgling into the microphone or throat clicking. There’s a balance between the technical and the emotional that you have to strike.

QUESTION: Did that director’s perspective lead you to your asking to re-record so many lines after seeing/hearing your original performance?

THOMAS JANE: I’m really interested in a great performance. I’m interested in the texture of a performance and I understand that, especially in the animated projects, the human voice is really all you’ve got to connect with on a visceral, emotional level. You’ve got the writing, the words, and the human voice. And that’s what gives it life. So even more so than live action acting, I pay particular attention to the vocal performances.

QUESTION: You’ve had the chance to perform the dialogue wild, and also to picture. Was it easier or more difficult to record the lines while seeing the actual animation?

THOMAS JANE: It’s both. Without the animation, you have more freedom to make up the rhythm of the scene, and you can take more chances in your delivery because hopefully the director will choose an interesting performance, and the animators will animate to that performance. Once you’re locked in and I come back to redo the lines, I’m stuck with the rhythms that have been predetermined by the animators. But that also gives me structure, which affords me some other freedom in the delivery of the dialogue – because then I have a set rhythm and I can play with the intensity of the performance. QUESTION: How would you describe your relationship with comic books?

THOMAS JANE: I discovered comic books when I was about 8 years old and I’ve been in love with them ever since. I thought I’d outgrow it, and I sort of did in my 20s, but then came back full force in the my early 30s. It’s because the medium is so powerful. As a kid, I thought of it as kid stuff, and then I grew up and found more adult material.

I never liked super heroes – I was always drawn more to a great story. I even loved the illustrated classics like Moby Dick – adaptations of a classic novel, or some of the original autobiographical stuff. And then there’s all the independents – Robert Crumb or Charles Burns or Daniel Clowes. The medium is so broad, much more so than film. There’s so much more room in comics for genres, styles, flavors, different auteurs. That’s what makes comics a great and timeless medium – a medium that will always be a compelling way to tell a story.

QUESTION: Do you have a favorite western?

THOMAS JANE: I love westerns. One of my all-time favorites is High Noon … and Stagecoach. Then there’s Red River, and The Unforgiven. Even The Treasure of the Sierra Madre has the western themes. That’s what counts. I think you could make a western in a city so long as it has that western theme of an individual against the group. Man against nature. The outsider. Those themes are common to all westerns, but you can branch that out into other genres.

QUESTION: Which actors do you most like watching perform?

THOMAS JANE: My favorite actors are the “still” actors – guys like Lee Marvin, Clint Eastwood and Steve McQueen, combined with Montgomery Clift, John Garfield, William Holden and Sterling Hayden. They were all guys who had something interesting going on underneath. That combination of stillness on the surface and a boiling underneath is pretty much my favorite way to go.

QUESTION: What’s the hardest part about being a celebrity?

THOMAS JANE: I think it’s the misconceptions that people have about you. When I met Ringo Starr, I went to shake his hand and he said, “How about an elbow?” So we rubbed elbows, laughed, and I thought, “What the hell – he doesn’t want to shake my hand?” But it was about germs – he was going on tour and he didn’t want to get sick. When I was on tour for Punisher, there were about 500 people in line for an autograph and wanting to shake hands, and I finally stopped. I got inventive. It was funny to be on that side of it. I figured that I had to shake several people’s hands over the next few weeks and chances were pretty high that I was going to catch something that would be bothersome. The point is that you’re going to upset some folks when you don’t act the way they think you should. But it’s got nothing to do with who you are. It’s about taking care of yourself.