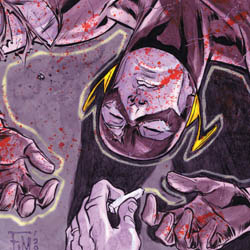 In the world of comics, it’s pretty common to hear fans like me upset for YEARS about a perceived slight or mishandling of a beloved character. But, in the spirit of the Brightest Day (Not that we have much explanation of what that spirit or even what the Brightest Day itself is… Bygones.) I’ve decided to stop whining and embrace the return of Barry Allen’s buzzcut and tie to the role of Flash. After all, at least Wally West wasn’t murdered on panel just to make sure that Barry’s brand wasn’t being tainted, and he’s not traveling through time to resurrect himself from the dead or wearing a godawful new costume or something. Gather around, Flash-fans, ’cause tonight we’re gonna party like it’s 1984! Previously, on The Flash: Barry Allen grew up in the midwest, reading comic books and studying science, and grew up to join the police force (albeit in a scientific capacity.) After a long night, he was struck by lightning arcing through his chemical shelf, causing a strange chain reaction that turned him into a Scarlet Speedster and founding member of the Justice League of America. After some time, he gave his life in battle against the evil Anti-Monitor. Years later, SOMETHING happened (and I still haven’t heard anybody clearly explain what) allowing Barry to breach the wall back from the great beyond and return to active duty as the Flash. With his old job, his old girlfriend, and his old Rogue’s Gallery in play, Barry expected everything to be the same as before, which made the arrival of super-cops form the future, patterned after his greatest enemies, such a surprise…

We open in Iron Heights Federal Penitentiary, where convicted metahuman felons are kept to protect innocent citizens. Apparently, these felons are kept in full costume, as we find the recently-dead-but-got-better Captain Boomerang in full suit, including jackboots, scarf, and leather trenchcoat being wheeled into the filthy infirmary. While a vicious guard yells that he’s going to Death Row (something I wouldn’t count on, as a second trial would probably comprise Double Jeopardy) Boomer lies there, an obvious victim of mistreatment by the C.O.’s. Digger (for that is Cap’s nickname) suddenly attacks, biting his oppressor on the face before taking a beatdown from multiple billy clubs. “No much without your boomerangs, are you?” sneers a guard. At that moment, a glob of black substance appears in Boomerang’s hand and coalesces into form: a boomerang. “Guess we’ll never know, mate,” he responds and quickly busts out of prison. There are half a dozen things wrong with this sequence, but I’ll just touch on the big’ns: Why is he in costume? How is he suddenly back in fighting shape? Even in a metahuman prison, doesn’t he have the right to NOT BE BEATEN? Meh… Moving on. Across town, in the CCPD Crime Lab, Barry Allen takes a dressing-down from his superior for seemingly contaminating a crime scene with his DNA. Apparently, his new boss hates his guts. Probably a Wally West fan…

Barry cuts out of work (because that’ll make the boss happier) to meet with Iris and get her help on a case he’s working (trying to free a seemingly innocent teen who has been imprisoned) when the coffee shop is suddenly blown open. Enter The Renegades, a task force from the 25th Century, each one patterned on a Flash foe from our time. (This is actually a kind of ingenious bit… I hadn’t realized until just now that the reason they’re taking their cues from the Rogues is that they’re trained to fight the Reverse-Flash. That’s neat.) Barry out-thinks them, but is outsmarted by their leader, Commander Cold and taken into custody. He is angry that they would try to apprehend him, having done nothing, but the Commander tells him that he’ll understand once the evidence is heard. Cold seems genuinely sorry about his job, but before any explanations are given, a black boomerang explodes in everyone’s face. The Renegades are thrown @$$ over teakettle, and only Barry is left conscious in the wake of the blast. “Wannabe Rogues with police badges?” asks a familiar voice as Flash tries to clear his head. “What’d I miss while I was dead?” asks Captain Boomerang… We end with a quick two-page recap explaining a little bit about Captain Boomerang and clearly attributing his new powers to exposure to Black Lantern energy before fading to black.

Hmm… I’m torn about this issue. On the one hand, I like certain little touches, i.e. the Renegade/Professor Zoom connection. The art of Francis Manapul is improving in terms of his storytelling (although he still has moments where he inexplicably changes “camera” angle or throws in a dramatically inappropriate scene, and his Iris West isn’t nearly as beautiful as the dialogue seems to want us to believe) but the soft-edges pencils as inks technique isn’t really effective on this character. Flash is about science and running and fighting and smiling and figuring things out, while the soft edge pastels seem more appropriate to Top Cow or a Spider-Man book. I am actively working to overcome my problems with the Mary Sue-isms already creeping into the book (and Barry’s boss calling him “Golden Boy” and seeming to hate him amplifies the problem rather than lessens is.) It’s a mixed bag. This seems like an odd arc to start things off with, and I’m unclear whether the previously-married Barry and Iris are still married, and I still don’t know what the Brightest Day banner is supposed to mean for a title. (Based on this book, Birds of Prey, and Green Lantern, it seems to mean that the main characters will be metaphorically kicked in the butt and abused?) It’s a likable enough book, though, with nothing overtly horrific going on, and as such Flash #3 earns a straight down the middle 2.5 out of 5 stars overall. Maybe it’s just me, but a major return like this might be worth a story with higher stakes and more substance?

Faithful Spoilerites Question Of The Day: Given that Digger Harkness has been convicted for the crimes that the guard accuses him of, then was dead and came back, CAN they even charge him with these crimes again?