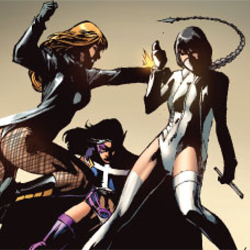 It’s showdown time in Gotham’s alleys. The mysterious new White Canary is playing her hand but can Black Canary and Huntress make it out of this fight in one piece? Is White Canary the mastermind behind the blackmail threat? Previously in Birds of Prey: After rescuing a child from a kidnapper in Europe, Black Canary and Lady Blackhawk get a phone call from their former boss, Oracle, asking to get the Birds of Prey back in business. In Gotham, the Huntress receives a similar call begging her to join the team due to a major threat made against them. After taking out a gang of Pep Squad rejects, Hawk and Dove relax at a bar when Lady Blackhawk invites them to join the team. Meanwhile, Oracle fills in Black Canary and Huntress on the cause of all her concern. Someone has files on the personal lives of every member of the team and promise they’ll kill one person from the files every hour until they’re stopped by the Birds of Prey. Suddenly a spotlight is seen over Gotham and when the girls trace it to its root they come across Penguin begging with a mystery person. When trying to diffuse the situation, the girls get knocked on their backsides and Penguin ends up with an arrow in his neck.

THE STORY OF DEFEAT

After recently tasting a bit of floor pie, Black Canary and Huntress realize that the person they’re fighting might be better than both of them combined. The two of them engage White Canary as Oracle sends backup but White Canary seems to be dealing with our heroes with ease. Huntress is able to confine their opponent as Black Canary lands a series of blows to her face and notices the intense rage in her eyes telling  us this is personal. Just then Lady Blackhawk drives down the alley and Hawk kicks off the car door ready for a fight. In a pretty bad ass scene, Hawk lunges towards W.C. but gets put through a wall instead. As he rises from the rubble, the team ponders how Hawk was cut (since his skin is like solid concrete), he then holds up a fist full of W.C.’s hair and says that he took a little something to remember her by.

As the fight continues, Oracle catches a newscast about the death of the kidnapper that Black Canary and Lady Blackhawk just took down. The news is blaming “Secret Martial Arts Techniques” used by Black Canary for the death. A news helicopter appears over the alley as the White Canary reminds them of her threat and leaves. Now having to deal with Gotham Police, the News, and a wounded Penguin, Black Canary decides its best to flee the scene to clear their names rather than succumb to Gotham’s authorities. After taking out the cops, the team throws Penguin over their shoulder and runs for the near by Iceberg Lounge. Oracle gets a phone call telling her that their one time enemy turned ally, Savant, is dead and that his association with the Birds is the reason for it. As the team runs through the alley, they find a television set up and turned to the news. The reporter broadcasts everything about Black Canary from her secret identity to her marriage to Oliver Queen to the location of her would-be daughter, Sin. Oracle has had enough and decides to show their enemy just how “connected” she can be.

I can’t tell you how happy I am to see this particular creative staff working on this title. Ed Benes is one of my favorite artists and I’ve enjoyed his run on previous incarnation of the JLA.  He can draw a woman to be curvy and sexy without having to over exaggerate their proportions. His men are muscular without seeming like they’re abusing steroids. Nei Ruffino has been a long time favorite of mine as well. Her colors on past projects like Supergirl, Superman/Batman and Final Crisis: Requiem brought the artists lines to a whole new dimension … just as she does here. And then there’s the lady that needs no introduction; the ever loved Mrs. Gail Simone. The woman who previously wrote some of this teams best tales. I’m sure we can come to expect great things from this team and if these first two issues are any indication of things to come, we’re all in for a new must read title each month.

This issue is one big smack down. Majority of its pages are filled with broken glass and broken bones. They’re going to have to make sure that next few issues have some decent fights in them; otherwise it could easily feel like they’ve used all their A-game in the first two books. Everyone in this issue gets a personalized “Yeah, I’m bad” scene except for Dove who has to deal with Penguin’s “pillowy bosoms” comments. I went into this title not as a fan of Hawk, but his ever present anger and tough guy attitude is starting to win me over. After the scene where he holds up a fistful of White Canary’s hair, he really felt like he could work on the team. However, that wasn’t my favorite moment of the book. When Oracle decides to go all out, it got me so excited for the next issue to see what kind of smack she’s going to throw down. I hope that they can pull off another WOW moment because if she perform less than (as she puts it) omnisciently, this build up would be a waste.

WHO DONE IT? A THEORY

I have my own ideas on who White Canary is and who’s behind the blackmail. How many times have we seen the plot device where someone is mentioned to be dead only to find out that they’re the mastermind? I wonder if they’re pulling another Tommy Elliot on us here. I’m not familiar with Savant’s cooperation with the team as Oracle says but it stands to reason that he could have been playing nice to get in close and access information that would have been previously unavailable to him. How hard is it to fake one’s death on a security camera in comics? As for White Canary … I’ve still got not good leads. I’ve recently picked up a few issues of past Batgirl comics where Cassandra thought that Shiva could be her mother and, if Shiva got a hold of her, I wonder if some sort of mind altering would have take place. I doubt more and more that it’s Shiva but still can’t eliminate her as a possibility. After all, she did once call herself the Jade Canary; maybe she’s changing colors. My last guess is the one I’m actually throwing my money on but is also the one that’s the most far fetched. Sin. I think that some how Sin was discovered, brainwashed and aged with the League of Assassin’s technology. We’ve seen some crazy stuff that they did with Damian’s body in the past so it doesn’t feel like aging a person is completely out of their realm of possibility.  I invite all the Spoilerites to throw down their guesses as well. Perhaps as a collective, we’ll have a shot at cracking this before the big reveals happen.

BRINGING MY OPINIONS HOME TO ROOST

This is a very easy title to pick up. There’s no prior knowledge needed to understand what’s going on; unlike a certain Legion title. The characters are diverse and entertaining and the introduction of this new villain is nothing short of fun. If you’re a fan of these characters’ past adventures, then I’m sure you’ll love to try and figure out this mystery as well. The art is nothing short of perfect and the writing is outstanding. I give this issue 4 out of 5 stars because, while awesome, it felt like it was only a very small piece to a larger puzzle. I get the impression that this entire issue took place over a 15 minute period of time and that, in the spectrum of the entire arc, isn’t the best we’re yet to see.