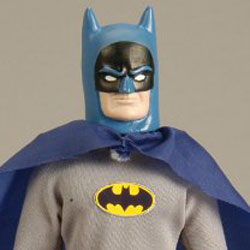 When Mattel released Green Arrow, the first figure in the Retro-Action DC line, it quickly sold out as the figure had the look and feel of the old MEGO figures from the 1970s.  The company posted photos of the Wave 2 collection that features Batman, Two-Face, Aquaman, and Black Manta.  Will they sell out as well?

No word on release date, though with San Diego just around the corner, expect these figures to be front and center at the Mattel booth.