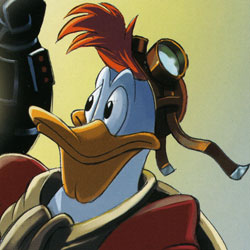 Life is like a hurricane.
Here in, Duckburg!
Race cars, lasters, areoplanes
It’s a duck blur
Might solve a mystery,
Or rewrite history!
DuckTales! A-Whooh-Ooh! Previously in Uncle Scrooge: As the world’s richest duck, Scrooge McDuck is always willing expand his empire, and his money belt. When his nephew Donald entered the Navy, he was asked to look after his great-nephew’s Huey, Dewey, and Louie. This meant the need for a house keeper, Mrs. Beakly, and her granddaughter, Webby Vanderquack. With pilot, Launchpad McQuack, the group travels the world having all kinds of adventures.

With the exception of Launchpad McQuack in this issue, the latest DuckTales story reads like any Uncle Scrooge adventure from Disney. The tale is indeed one that spans the globe, as Scrooge, Donald, the nephews and Launchpad, travel to the far off land of Brinjalbhaji Mountains looking for Everlasting Coal- coal that burns forever and never dwindles in size. While it may not be entirely eco-friendly, Scrooge quickly sees this as a way to solve the energy crisis around the world (and reduce his own energy bill in the process).

Of course it’s not going to be a grand adventure unless there is a rival, and that’s exactly what Flintheart Glomgold intends to do as he sabotages Launchpad’s plane in order to get the advantage. Unfortunately, for everyone involved, The Basmati tribe rule the area with an iron fist, destroying all villages and people. Flintheart is captured, which means our heroes must rescue their rival, and keep from getting killed.
As often happens in Uncle Scrooge/DuckTales stories, while the treasure may be lost, Scrooge finds himself on top, with a huge back full of the ever burning coal they found in a local village.

Except for the addition of Launchpad, this DuckTales adventure is nothing more than a regular story one might find in a regular Scrooge story. The writing isn’t anything spectacular in this issue, though the story does move logically from Point A to Point B. I did think the story was wrapped up a little faster than what we normally see in these Disney tales, and that may be where some of my disappointment comes from. As a young lad, I remember DuckTales having a lot of exposition crammed into 22-minutes, and was never disappointed at the end of the show.

The backup tale features Webby and the nephews building their own version of the GizmoDuck suit, with the boys arguing that girls should never be in the suit. As one might guess, she does end up in the costume, and attempts to thwart the Beagle Boys from robbing Scrooge’s art collection. The Boys eventually see through the disguise, and hold the children for ransom, until the real GizmoDuck makes an appearance and saves the day.

If anything, this story is a perfect discussion point for anyone who wants to get in on women as heroes. Webby holds her own, and is a likable enough character to show that there can be strong female characters. If you are a parent of a young child, and you read this book together, then you might want to use this as story as a discussion point.

For the first couple of pages, there was something about the art that I just couldn’t put my finger on, then it struck me – There’s a whole lot of space in each panel that just seems wasted. It just seems that the characters are drawn smaller than normal, which makes the panels seem really empty. I’ve grown used to reading Barks and Rosa stories, where the pages are packed with information. This issue just didn’t feel that way. I don’t know for sure, but I wonder if the translation to English didn’t have something to do with it.