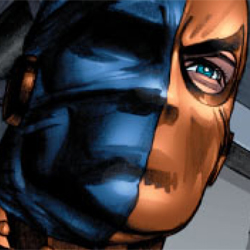 Deathstroke’s newly assembled team is given their first assignment. The target? Lex Luthor’s motor caravan. Can this rookie team of rogues learn to play nice long enough to get the job done? Previously in Titans: Deathstroke traveled the world to recruit criminals and lost souls to join him. His new team is comprised of Cheshire (assassin and mother of Red Arrow’s recently deceased daughter), the Tattooed Man (a man who recently lost his son), Cinder (an assassin with yet unknown personal trauma), and Osiris (brother to Black Adam and Isis who are currently trapped in stone). All of them were promised solutions to their various problems either through vengeance or assistance. Their first mission was the murder of Ryan Choi, also known as The Atom.

At Titan’s Tower, Osiris talks with his one time teammate Wonder Girl who insists that he turn himself over to the authorities for the death of Persuader at his hands years ago. More occupied with restoring his family to flesh from stone, he turns his back on the Teen Titans and flies off. Meanwhile in New York, the Tattooed Man and Cheshire break into a factory to steal some schematics and find themselves fighting off a group of ninjas before escaping. At Deathstrokes’ base (The Labyrinth), Cinder walks the halls and stumbles across Osiris seemingly talking to himself. When entering his room she discovers the statues of Black Adam and Isis but as she goes to touch them, Osiris grabs her arm to stop her. Cinder reacts to being touched by trying to blow up Osiris as Deathstroke watches through a security camera.

Several hours later, the Titans meet in the Labyrinth’s Communications room to go over the next job. They’re to attack a heavily guarded caravan as it travels through the city. The reason for all the security? Lex Luthor rides in the center car with three associates and his new personal assistant. Lex addresses them all and reveals that he knows there is a traitor in the car with him and if he surrenders and reveals himself, he’ll let him live. Right as Lex is about to kill all three associates the Titans attack the caravan and begin to slaughter Lex’s men. All of them attack except for Osiris who sees no point in killing these men if it doesn’t restore his brother and sister. Just as he says his sister’s name however, a bolt of lightning kills a soldier coming for him and Isis’s statue begins to crack. Cinder runs up to Lex’s car and makes it explode only to find it’s inhabitants have fled to the sewers in all the commotion. Lex asks his assistant what their plan is and when she’s about to reply, Deathstroke puts a bullet in her head. Unsurprised, Lex asks Deathstroke what took him so long to discover the traitor in his midst. As he explains, Deathstroke notices that Lex’s assistant is no longer dead in the water. She now stands behind them both with a bullet hole in her head, guns pointed at Lex and Deathstroke and calls herself Facade.

IS TWO A CROWD?

The first thing I wonder about the new direction this title is headed in is if this is going to be another Secret Six. Yet again we have a group of people most would call villains doing seemingly any job for a price. Judging by the previews of future issues, it looks like they’re not only dastardly deeds but the occasional hero work. Secret Six is consistently impressive but is there room for both of these teams to exist? I think that the people have spoken and like the concept of villains for hire. I hope that this new team impresses everyone as much as it impresses me. If written well, I’m sure there is more than enough room for both to coexist … at least until someone hires them to eliminate each other.

One of the things that drew me to this book is the inclusion of Osiris. I’m a huge fan of Black Adam and am ravenous for any story involving his family. My heart goes out for Osiris. I can only fear having someone I love trapped forever at an arms length from me for all time. What good is all your god-like power and a new life if all of your loved ones are gone? I have a horrible feeling that Osiris’ death is the key to his family’s freedom; keeping them forever apart. I truly feel that Osiris is a hero that only needs a righteous path to follow.

The art is refreshingly different. It has a sketch-like look to it that works very nicely. Of all the pages, one of my favorite has to be the full page of Osiris calling down the lightning to stop Luthor’s caravan of vehicles. The darkness of Osiris’ coat mixed with the bolts make for a cool effect while the expression on his face and tension in his fingers remind you of just how powerful he could be if he chooses. The best page, however, is once again a panel of Osiris but he’s not the impressive part of this page. When Osiris says his sister’s name a soldier is killed, the brutality of the attack is represented so vividly as the lightning blows a hole through him, rips off a piece of his face and sprays his blood across the street. The effect is so cool looking that it made me say DAAAAAAMN!!! On the other hand, the Tattooed Man’s body art is creepy but it’s still the same think we’ve seen in past stories. If you had the ability to make your tats come to life wouldn’t you be adding new work every chance you got? I’d like to see something new out of him soon, especially since he knows how to put them on himself. I’m really enjoying this art style and hope that Mike and Fabrizio stay on the title.

For the first issue in the title (I’m not counting the one-shot), I really enjoyed what I read. Sadly, I never got into Secret Six except for a Battle for the Cowl cross over issue. I’m sure I’ll pick up some trades of it eventually but in the meanwhile I’m sure Titans will fill that need perfectly. I give this issue four and a half out of five stars.