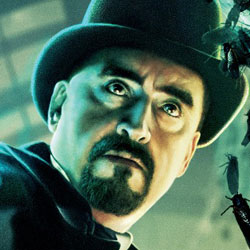 The Sorcerer’s Apprentice reveals The Villain

We’ve seen Alfred Molina in the trailer for Disney’s The Sorcerer’s Apprentice, and today, the studio reveals all the information about Maxim Horvath, The Villain.

MAXIM HORVATH “The Villian” (Alfred Molina) was, along with Balthazar Blake and Veronica, a disciple of Merlin and a force of good more than a thousand years ago.  But their mutual love for Veronica split the colleagues apart and Horvath has instead become an ally of the wicked Morgana, who murdered Merlin and is seeking to conquer the world with her minions.  He and Balthazar have battled through the ages, finally bringing their conflict to modern-day New York City.  “In ‘The Sorcerer’s Apprentice,’ Horvath’s mission is world domination,” says Molina.  “Balthazar and Horvath have a rivalry that’s gone on for millennia.  Balthazar is maintaining the Merlinean standard of magic as a power that’s used for the benefit of mankind.  Horvath is the leader of the Morganians, who take the very different view that magic should be used to subjugate humans.  That’s the struggle between good as personified by Nic Cage’s character, and evil as personified by mine.  Horvath is a rather smart, debonair, Edwardian villain in the classic tradition of suave bad guys, well dressed and charming, but deadly.”